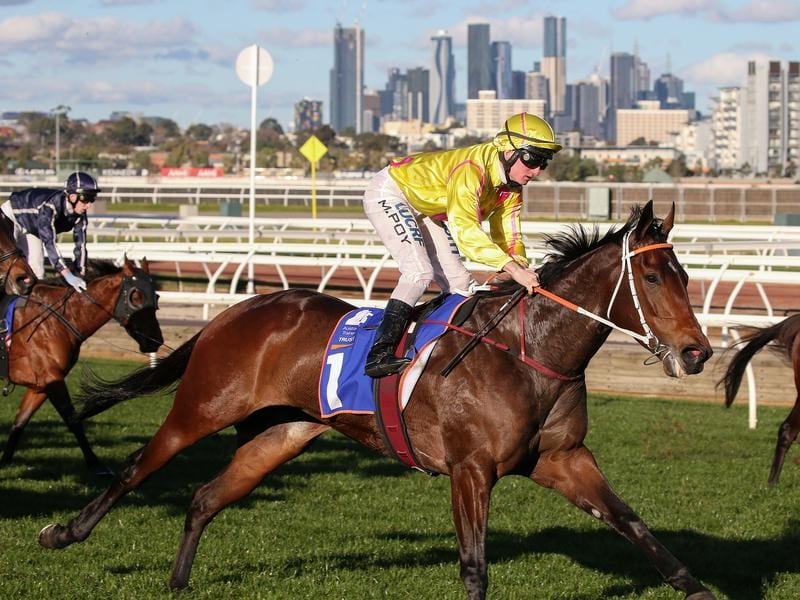 Sylvia’s Mother will be out to score another Melbourne win when she runs in the Cockram Stakes.

Co-trainer Wayne Hawkes is banking on the warmer weather in Sydney giving Sylvia’s Mother an edge ahead of a stakes race at Caulfield.

A last-start winner at Flemington, Sylvia’s Mother returned to Sydney shortly after to prepare for Saturday’s Group Three Cockram Stakes.

Sylvia’s Mother arrived at Hawkes Racing’s Flemington stable on the morning before her July 20 victory and was on the float back to Sydney the following Tuesday.

Hawkes, who runs the Flemington stable, was in Sydney last week to see the mare run second in a Warwick Farm trial.

“She looked better on Friday morning at the trials than the day she won,” Hawkes said.

“It’s warmer up there in Sydney at the moment so we leave them up there in the better weather.

“She’s done it before, knows what it’s about, so there’s no reason why she can’t do it again.”

The mare has raced at stakes level once previously when fifth in the Light Fingers Stakes at Randwick in February.

“It won’t be easy. It’s a big step up in class and there’s some pretty handy mares in the race, so it will be a good test for her,” Hawkes said.

Sylvia’s Mother drew an outside gate down the straight at Flemington and has gate one on Saturday.

Hawkes said Saturday’s race shaped differently to the one at Flemington with the inside draw a bonus.

“Forensics won a Golden Slipper from barrier one and everyone said ‘oh, barrier one’, but if she drew out everyone would be saying ‘barrier 16, she can’t win’,” Hawkes said.

“You’re always better to draw one than the outside.”

Sylvia’s Mother is the $3.40 second favourite behind last-start impressive Caulfield winner Pippie at $2.70.