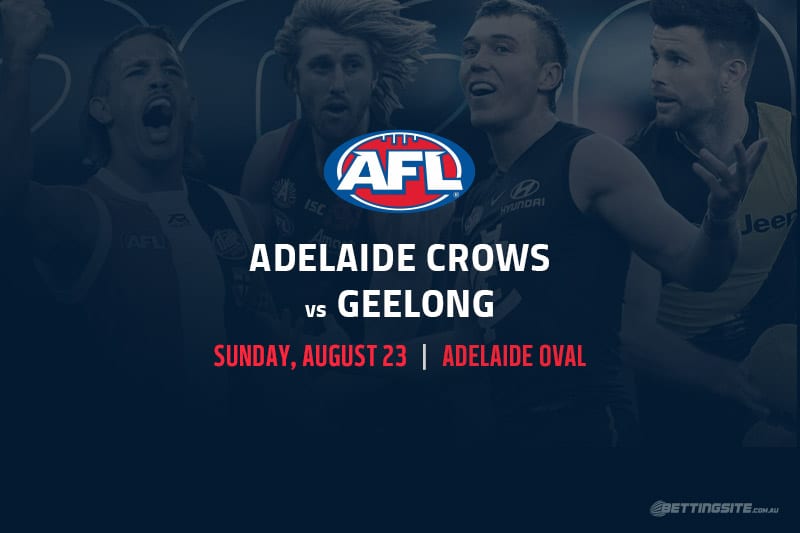 AFL betting sites have the winless Adelaide Crows at $8.70 and Geelong at $1.09. If you’re after a certain 9% profit on your investment, then look no further than the Cats. This could be scary viewing if you’re a Crows fans, especially with big Tom Hawkins coming off a bag of six goals against the ladder-leading Port Adelaide.

Speaking of Hawkins, he could quite possibly cover the line himself against the unstable Adelaide defence. As the season draws to an end, expect teams in the top eight to treat their games against the Crows as a percentage-boosting opportunity. The Western Bulldogs capitalised with a 57-point win over the bottom side last round in perfect conditions on the Gold Coast, and similar conditions at the Adelaide Oval will make it a sour Sunday afternoon at the footy for Crows fans.

For years, Gary Rohan has been a frustrating player to watch; if you follow the Swans or the Cats, he has triggered you beyond belief at some point. However, 2020 seems to be the year for Rohan. While he only has 15 goals this season, seven of those have come in the last two weeks against strong teams in St Kilda and Port Adelaide. He seems like such a difficult matchup for the Adelaide back line, so look for Rohan and Hawkins to run riot.

With 11 goals in 12 games this season, Sam Menegola will look to hit the scoreboard early and keep pushing his case for a maiden All Australian selection. He has kicked a goal in each of his last five games, so let’s hope he continues that streak and gets it done by half-time.

Elliott Himmelberg is starting to string some games together and keeps popping up for a goal a week. This is a chance to go one better and show the Adelaide coaching staff and the fans that he can be the key target they’re crying out for. No one is expecting him to set the world on fire, but a couple of goals against a premiership contender will give him a certain amount of confidence going into the back end of the season.