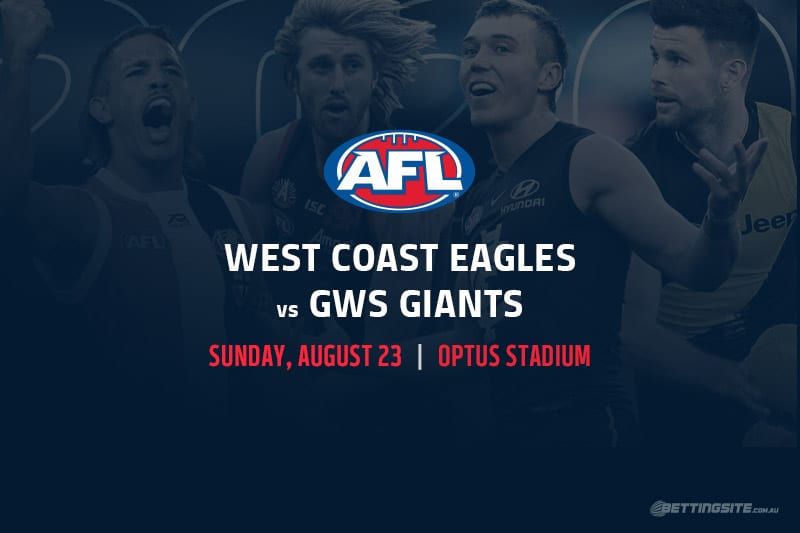 Will this be the last time this season we see footy played at the magnificent Optus Stadium? The West Coast Eagles will be looking to extend their winning streak to eight when they come up against the underperforming Greater Western Sydney Giants. GWS only managed three goals last week against an inexperienced Sydney Swans side, so the Eagles will be looking to heap more woe on the Giants before both teams head back to Queensland hubs.

Based on current form, the line should probably be about -30.5 for West Coast, especially if the Giants dish up what they did last Thursday against the Swans. The Eagles are arguably the form team in the competition and will want to give the Perth crowd something to cheer about before they head back to Queensland. This is a must for any weekend AFL multi bets you will be investing in.

The 2019 Coleman Medal winner is $2.30 to kick two goals at any stage during this matchup, and that’s genuine value for money. If the Giants are to bounce back with a strong showing this weekend after a poor performance against the Swans, then their gun forward would have to kick two goals at a minimum for that to happen.

This man is the definition of clutch, as he knows how to get things done in the big moments. Dom Sheed and the rest of the Eagles midfield will be looking to farewell their home crowd in style with a sixth victory from as many games at Optus Stadium. With the Giants lacking shutdown players outside of the injured Matt de Boer, expect Sheed to rack them up as he pleases. He should also sneak forward and get on the scoreboard, so add him in as an anytime goalscorer at $1.83.