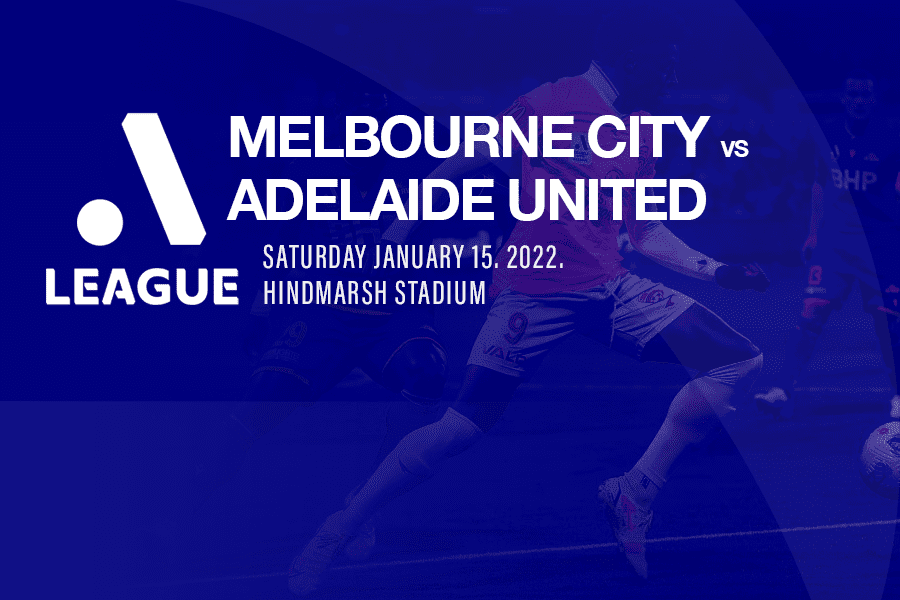 Melbourne City travel to Hindmarsh Stadium on Saturday night to take on Adelaide United in what is set to be another Covid impacted week of the 2021/22 A-League Men season.

Adelaide United bagged a last-minute equaliser against the top of the table Melbourne Victory last weekend, with thanks to a 91st minute goal from the inform Craig Goodwin. Despite the result, United are still one point out of the top six and will be chasing just their second win of the new season.

Melbourne City also had to settle for a draw last weekend against the Western Sydney Wanderers, in what is arguably the most entertaining game of the season so far. City went behind 2-0 early on, before finding themselves up 3-2 in the 60th minute, only to concede eight minutes later.

When these two sides last met, it was a four-goal thriller earlier in the season when Adelaide United came from 2-0 down, to bag a share of the points with a 90th minute goal from the now transferred Ben Halloran.

United will be hoping that Craig Goodwin can continue his recent form, having bagged three goals and an assist in his past two games in the A-League. Alongside George Blackwood and Stefan Mauk, they will be sure to give the Melbourne City lineup a few headaches on Saturday night.

Last week’s game against the Wanderers was Melbourne City’s first game in the A-League since December 18 following massive Covid-19 disruptions within their squad. It was pretty quick to see they had a touch of “ring rust” when conceding twice within the first ten minutes.

If Melbourne City bring the type of effort that saw them score three goals in 44 minutes last weekened, to Adelaide on Saturday then their all-round star power should prove the difference against the underperforming Adelaide United side.

Despite conceding three goals last week, we expect a tighter performance in defence from City against this Adelaide United side. They took a two-goal lead when they last played in Adelaide earlier in the season, but let it slip needing to settle for a 2-2 draw. With a match under their belts and an attacking trio of Jamie Maclaren, Andrew Nabbout and Matthew Leckie, City should just be too strong for Adelaide. Outside of the form of Goodwin, this Adelaide side should not pose too many issues and with $3.30 available for the -1.0 start, it is too good a bet to pass up.

Jamie Maclaren will go down as one of the best players to have graced the A-League and despite a relatively slow start to the season by his standards, we anticipate he will be the first goalscorer on Saturday night. He has three goals from six matches, a strike rate many would be happy with, but we expect the Socceroo will be wanting a bit more. Maclaren netted the first goal when these two sides last met and managed to score City’s second goal last weekend. He is up there as one of the best finishers in Asia and considering $4.50 is on offer for him to score first, we are willing to take that quote and run.