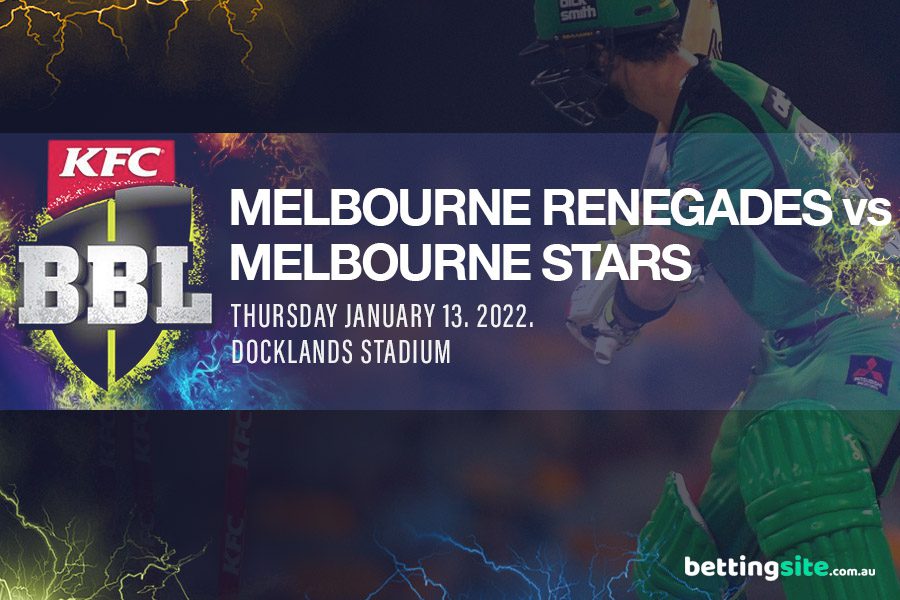 Both teams find themselves near the bottom of the table nearing the end of the home and away season but nevertheless it should be an interesting game because there really isn’t much separating them. The Melbourne Renegades lost by 45 runs in their BBL matchup on Tuesday but the Stars are a lot weaker than the Sixers and the Renegades look like a team that just needs a few dropped catches from the opposition fielders in order to score some runs again. Aaron FInch has a stellar reputation of course and he’s due to score some big runs very soon.

Their strength is in their bowling and Reece Topley and Kane Richardson are the best that they have. Topley’s most recent performance was on the 3rd January and his 3 for 27 was his best performance of the season. Kane Richardson has been in brilliant form this year and he is one of the premier bowlers in the BBL. If both of the pace bowlers are allowed to settle on a length then they’ll be very hard to stop and it might be a good idea to allow them to bowl them in tandem in order to break the Stars’ confidence.

The Melbourne Stars can only look forward to redeeming some pride because they haven’t won a game since December 27th. Joe Clarke is the exception to the rule because he has had a brilliant run of form with four fifties in his last five games. Hilton Cartwright has been ordinary in his last two games but he could explode with a big score at any time. Qais Ahmed from Afghanistan is also effective on any given night when the fielders offer the required amount of support but he must find a way to become more consistent and cut out the bad ball from his game which is very difficult to do. Brody Couch has been a good find for the Stars this season and he has quickly won a reputation for bowling effectively almost all the time with his right arm medium pacers.

The Renegades should bat first if they win the bat flip in order to put some scoreboard pressure on the Stars who lack confidence with the bat. Docklands is a good place to bat and the only issue is that the lights are a bit lower than normal. This game will be decided by the outfielders which make me lean towards the Renegades. Renegades should win a high scoring game by 3 wickets or 30 runs.

Online bookmakers have Melbourne Renegades at $2.20 and the Melbourne Stars are at $1.66

A bowler who sticks to bowling straight and fast at the stumps doesn’t have to worry about the fielders backing him up and Kane Richardson should continue success in this game. So far this season he has reached the assigned target on four occasions in ten games this season so you should be in for an exciting night if you decide to invest accordingly. His yorker is deadly and the way he handles bowling in the death overs is all class. Another very good bowler who appears to have fallen out of favour with the Australian selectors and it would be a crime if he doesn’t play international cricket this summer.

He has definitely been an “under the radar’’ sort of player who I didn’t rate all that highly not too long ago but I’ve had to revise my opinion of him this season. He just loves to get the bat on the ball and scamper for quick runs by running hard between the wickets all night. This means he is a consistent scorer but that doesn’t mean he doesn’t make powerful shots with his sweet timing. He looks like he’s too classy for the Renegade’s bowlers who can be ordinary when things go against them. Very hard to stop once he gets into double figures.