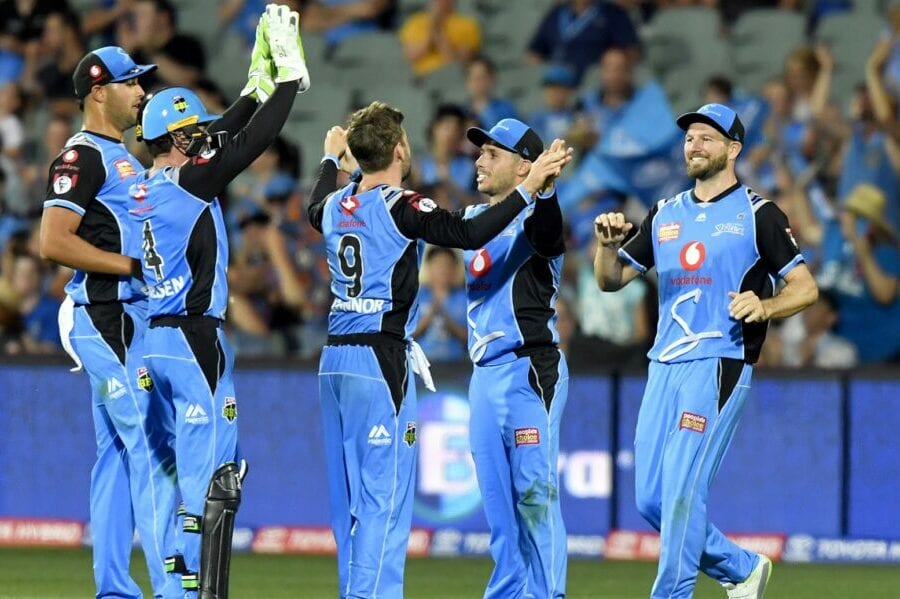 The Adelaide Strikers were one of the form teams leading into the BBL09 finals series, but two disappointing performances saw them eliminated in the Knockout match after finishing third in the regular season.

With the services of proven stars in Rashid Khan, Peter Siddle, Travis Head and Alex Carey, the Strikers are gearing up to be contenders yet again in BBL10.

Let’s see how they are shaping up in the major BBL betting markets for 2020/21.

With a few strong additions and only Billy Stanlake missing from last summer’s best lineup, it’s hard to think the Strikers won’t be in finals calculations.

Dan Worrall fills Stanlake’s shoes and offers more game smarts than Billy, while Matt Renshaw will look to build on his solid performances with the Brisbane Heat last term.

Gun imports Rashid Khan and Phil Salt are joined by Danny Briggs, a left-arm orthodox spinner who has seven T20I caps for England.

Given the solid additions to the squad in the off-season, the $6 at Sportsbet on offer for the Strikers to claim the BBL10 title would be a hugely tempting option for punters.

They look to have enough depth to cover any players they may lose to international duties – namely Alex Carey, Travis Head and Rashid Khan – and should be competing towards the business end of the campaign.

We think Jason Gillespie’s side will finish in the top three and give themselves every chance to win it all this season.

There looks to be plenty of value in the BBL top scorer markets for the Strikers, and it’s one of the new signings that has caught our attention.

Matt Renshaw looks set to play a crucial role in the middle order and has developed an attacking side to his game that many weren’t sure he had.

He had his best season in the BBL last year for the Brisbane Heat, and punters can get odds of $8 for the Queenslander to be the Strikers’ top runscorer in BBL10.

With Rashid Khan and Michael Neser likely to shoot off for international duties at various points throughout BBL10, the value looks to be with Peter Siddle at $3.25 to be Adelaide’s top wicket-taker in BBL10.

The Victorian took 19 wickets in BBL09, finishing equal with Rashid at the top of the Strikers’ wicket-taking charts.

Now that he’s out of the international scene and focusing more on his T20 craft, there is no reason why Siddle can’t do it again this season.

One to watch for the Strikers in BBL10 is Phil Salt, who provided more than a few highlights last summer in his maiden Big Bash campaign.

With an average of just over 26 and a strike rate of close to 160 in T20 cricket, the Welsh batsman provides entertainment right from ball one.

Now that he has a season under his belt at Adelaide, Salt will be looking to build on the foundations he laid in BBL09 and help progress the Strikers even further this summer.