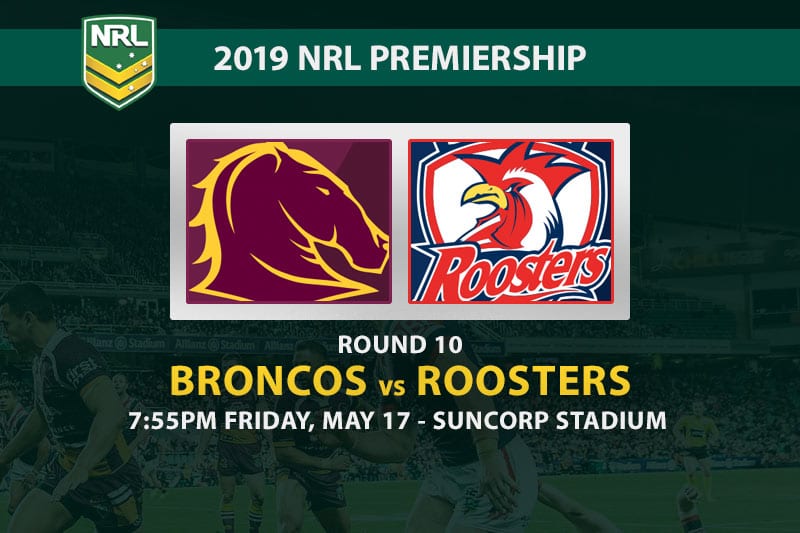 Things looked dire for the Brisbane Broncos when Manly jumped out to a 6-0 lead in last Friday’s clash at Suncorp Stadium.

But Anthony Seibold’s men rallied in the second half to snatch a crucial ‘away’ win that puts them within two games of the top eight.

Any finals charge will have to come without Jack Bird, who is set to miss the remainder of the season with a knee injury.

Gehamat Shibasaki replaces the NSW Origin rep in the centres, with Jamayne Isaako recalled to the wing.

The Sydney Roosters lit up the Magic Round with two tries inside six minutes in their top-four tussle with Canberra on Sunday.

The Raiders made the scoreline look respectable with three tries in the last half-hour, but the reigning premiers were in cruise control by that stage.

Nevertheless, Chooks coach Trent Robinson will demand 80-minute performances from here on out with the likes of Souths and Melbourne breathing down the leaders’ necks.

Sydney are without the concussed Boyd Cordner, which sees Mitch Aubusson named start and Lindsay Collins promoted to the bench.

The Broncos had five different tryscorers last week, but Oates has to be every punter’s first port of call. The big winger has found the line four games running and was Brisbane’s first tryscorer in two of those.

There are few players who are as dangerous down the sides as Oates, but this guy is one of them. Mitchell has notched a lazy five tries in the past two weeks and looks a very decent shout to score multiples again.

Brisbane vs Sydney stats and trends

A lot will have to go right for the Broncos to down the title favourites.

Their notoriously suspect tackling game has to lift, while teenage halfback Tom Dearden must hold his own against one of the game’s greats.

Cooper Cronk is in vintage form, as are Luke Keary and James Tedesco, and it is hard to see Brisbane’s playmakers matching them over two halves.

The hosts will also need to have sure hands, as turnovers often lead to tries against the speed of Mitchell, Tupou, et al.

Brisbane have struggled to compete with the top teams this year, and this will be no exception.