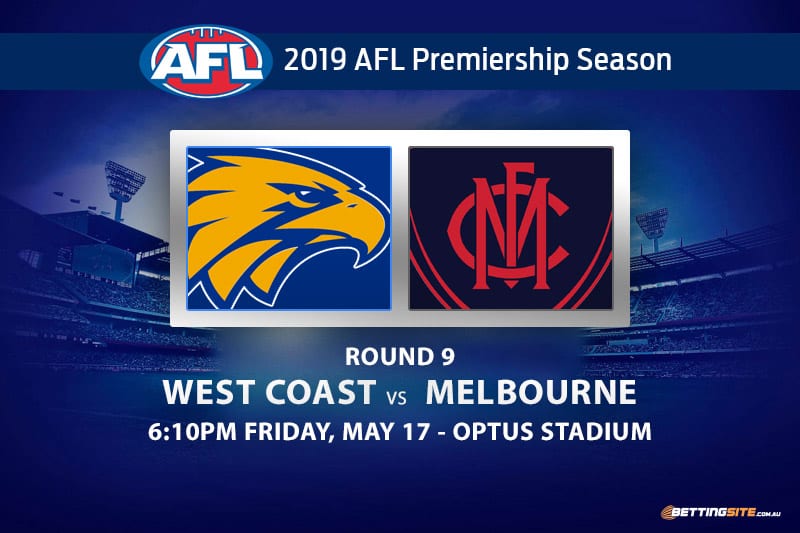 They faced off in a preliminary final last season and will battle it out at the same venue again this Friday night.

The Melbourne Demons gained plenty of momentum coming into 2019 after last year’s run to the prelims, but they have stumbled out of the gate and sit 15th with only three wins.

Many experts have ruled the Demons out of finals, but a win against the West Coast Eagles this week could change everything.

The premiers are coasting along this season with five wins from the opening eight rounds, two of those victories coming in the last fortnight.

Both sides should be much higher on the ladder at this point, but they have started off the season very slowly.

A win this week would be massive for either team, so here are our tips for Friday’s clash at Optus Stadium.

Dom Sheed to kick a goal
He kicked one of the best AFL Grand Final goals ever recorded and has not stopped in 2019. Sheed has slotted eight goals this year, which equates to one per match. He will continue his impressive average against the Melbourne midfielders, who have not defended well to start the year.

Jake Melksham to kick two goals
Tom McDonald kicked three goals last week, but he is not leading the Demons’ goalkicking. Melksham has kicked the most goals for Melbourne this season and is developing a reputation as an underrated player. He was the only man to kick multiple goals for the Dees in their prelim mauling last year.

Elliot Yeo to get 25 disposals – $1.72 at Sportsbet
With the Demons playing more tough and big-bodied midfielders, there is no better team for the Eagles to play Yeo in the middle against. He has found himself on the wing and at half-back at times this season, where he doesn’t get the ball as often as he can. When Yeo was in the middle against the Suns a fortnight ago, he tallied 28 touches. The former Lion is a proven champion and will get plenty of the footy in this game.

Clayton Oliver to get 30 disposals – $1.45 at Sportsbet
Oliver is coming off a career-best night last week, with 38 touches and 15 tackles. He will be ready to go this week and the young superstar is not going to play soft footy. The Eagles will try to stop the young bull, but it is difficult to subdue a player when they are in red-hot form.

Total Match Points Over 154.5 – $1.88 at Sportsbet
Despite the chilly winter days slowly entering the frame, Perth is set for a sunny day with no rain in sight. The total of 155 is hard to reach for sides that cannot score, but the Eagles have one of the most dangerous forward lines in the competition and the Demons should be able to compete well given the conditions.

West Coast are a force to be avoided when they are up and about, especially on their home turf. The Eagles will win the match and exceed the 21-point line, even if the Demons play good footy.