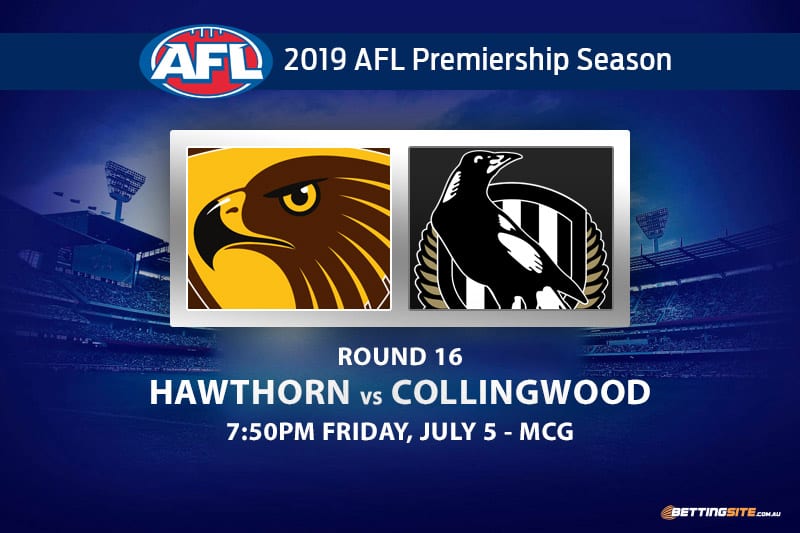 The MCG will be packed this Friday night when the Hawks and Magpies face off to kickstart round 16.

No matter their positions on the ladder or current form, both these two sides are known for providing a great contest each time they play.

Even when the Hawks were at their worst and the Pies were in the AFL Finals, the match was still a close and high-scoring event.

Hawthorn is currently sitting 15th on the ladder after a disappointing season to date, whilst the Pies find themselves in second position despite some poor displays.

A plethora of injuries to Collingwood has left many tipsters thinking this will be a danger game for last year’s grand finalists.

The Hawks have had the run over the Pies in recent times, winning four of the last five clashes.

If the brown and gold can execute their plans well, they could do the same as North Melbourne did last week and knock off one of the flag favourites.

Isaac Smith to get 20 disposals @ $1.36
Whilst the Hawks’ season isn’t going as well as they had planned, Smith has enjoyed his footy in 2019. With an average of 22 disposals per game, the rangy winger has been one of the prime movers for Hawthorn. In the last three weeks Smith has averaged just over 25 disposals per match, so the form is there.

Tom Phillips to get 25 disposals @ $2
Phillips has exceeded 25 disposals in half his matches this season and has a good record against the Hawks. The hard-running midfielder was one of the Collingwood players that should have performed better last week, so he will be determined to make up for it with a big game on Friday.

Hawks vs Magpies Round 16 goalscorer betting

Luke Breust to kick two goals – Best odds at Ladbrokes
Breust has enjoyed many bags of goals against the Pies in the past. With Jeremy Howe ruled out with a calf injury, the Hawthorn goal-sneak should have the edge over whomever gets the job on him. He has kicked 23 goals so far this season, placing him inside the top 20 across the competition.

Mason Cox to kick two goals
The big American Pie has not played his best footy since returning from injury, perhaps because he has been forced to share the forward line with two other tall targets. Ben Reid went down with a calf last week and will not play against the Hawks, leaving room for Cox in the air against Hawthorn’s undersized defence.

Over 175.5 total match points @ $3.40
The conditions are expected to be perfect for this match. Hawthorn and Collingwood consistently have played in high-scoring affairs, and this week should be no different. Both sides scored poorly last week, but they will turn that around in front of a packed house at the MCG.

Haws vs Magpies Round 16 match predictions

If the loss to North Melbourne doesn’t wake up the Collingwood squad, then nothing will. Nathan Buckley needs his Pies to respond after their embarrassing output in June.