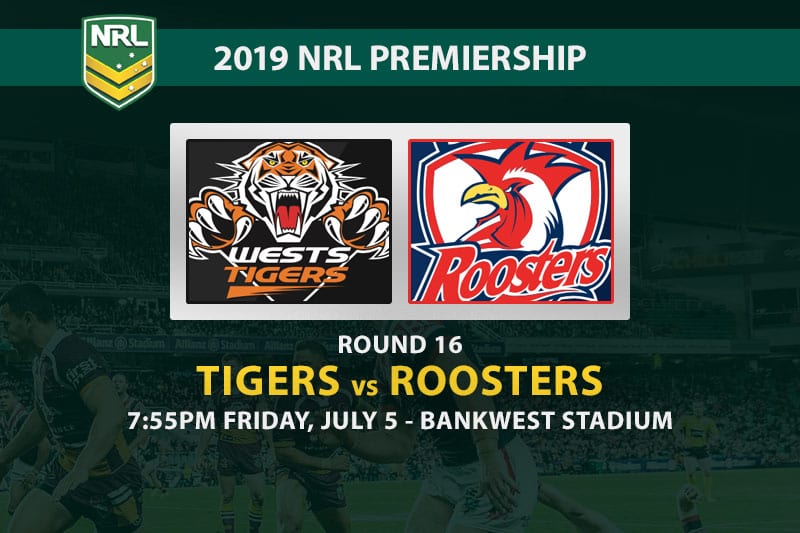 Wests play Easts on Friday night footy in a match that could impact each side’s NRL Finals hopes.

The Tigers are back in business after two wins on the bounce and will have a spring their collective step after beating the South Sydney Rabbitohs last time out.

Michael Maguire’s men sit ninth at present, but they could kick the Parramatta Eels out of the eight with a win over the reigning premiers.

The State of Origin period has not been kind to the Roosters, who have lost four of their last five games to give the Melbourne Storm a six-point lead in the 2019 NRL standings.

Their only win in that stretch was over the last-placed Canterbury Bulldogs, so the standard needs to lift if the Chooks are to stay in touch at the top.

Moses Mbye is away with the Queensland squad, which sees Paul Momirovski start in the centres. Oliver Clark drops out of the side to make way for Josh Aloiai, who is back after a spell out with illness. Former co-captain Russell Packer and forgotten man Josh Reynolds are named among the reserves.

Boyd Cordner and James Tedesco are busy preparing for Origin III, but the Chooks have a wealth of experience returning with Luke Keary and Jared Waerea-Hargreaves back in the side. Ryan Hall is named to start on the wing, which pushes Matt Ikuvalu to the bench alongside Sitili Tupouniua.

Tigers vs Roosters Round 16 tryscorer odds

David Nofoaluma – This guy was prolific last season, but it has taken him a few games to get going after a lengthy layoff. The Tigers playmakers should be looking for him at every opportunity.

Latrell Mitchell – Luke Keary’s return sees Latrell move back to the centres, where he has scored a lazy 10 tries from his last seven starts. You can bet he will want to show the NSW selectors what they are missing out on.

This was shaping as a huge opportunity for Wests to claim another scalp, but the inclusions of Keary and JWH have tipped the scales back in Sydney’s favour. Expect a hard-fought win for the Chooks.