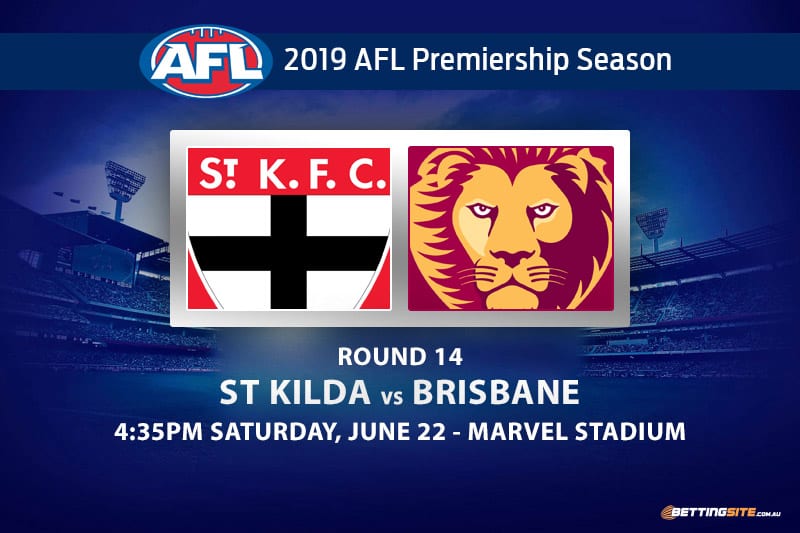 Two sides that are well and truly in the finals race will face off at Marvel Stadium this Saturday afternoon when the Saints host the Lions.

Prized St Kilda recruit Dan Hannebery will play in the seniors for the first time this season, while key backman Jake Carlisle also comes in after an injury layoff.

The Lions have three inclusions of their own, headlined by big Oscar McInerney and former Cat Allen Christensen. Ryan Lester also makes his way back into the side.

St Kilda has won the past four matches against Brisbane, but the Lions have changed their style in 2019.

The fast ground under the Marvel Stadium roof will bring the best out of two sides who desperately want to win this clash and bolster their finals chances.

Josh Battle to kick a goal @ $2.10
Since the young forward transitioned into the backline, he has helped the Saints tremendously with structures and rebounding from the back 50. Battle has a great aerobic capacity which allows him to run off a lazy opponent, often resulting in a long-distance shot on goal. He can even swing forward if the Saints need a target.

Eric Hipwood to kick three goals @ $2.25
Although he only touched the footy seven times in last year’s match against the Saints, Hipwood will be licking his lips for this one. Jake Carlisle hasn’t played a senior game all season and will be well short of full match-fitness, which will allow the extremely mobile Hipwood to get out the back and lead up with ease.

Sebastian Ross to get 25 disposals @ $1.53
Seb has been a known ball-magnet for a few years now, and he loves facing the Lions. In 2018’s clash he gathered 32 disposals and was just about best-afield, a fond memory he will bring into this match-up. With Dan Hannebery back in the team, Ross will get more opportunity on the outside, as Hannebery will be shooting out handballs from the congestion.

Hugh McCluggage to get 25 disposals @ $1.80
The former no.3 draft pick has made a name for himself north of Victoria, but he is back in Melbourne this week and ready to rumble. McCluggage has been brilliant for the Lions in his third season and will have another great game this week, adding to a string of high-possession performances.

St Kilda vs Brisbane Round 14 Wire to Wire special

St Kilda / Brisbane / Brisbane / Brisbane @ $10
The Lions have had an issue this season where they start matches off slowly and have to mount a comeback in the second quarter. The Saints have been good this year, but they barely beat the Suns and will be up against an angry Brisbane outfit that lost to Carlton before their bye.

Saints vs Lions Round 14 match betting

Brisbane coach Chris Fagan will get his Lions engaged in this match and make up for the loss against the Blues from two weeks ago.