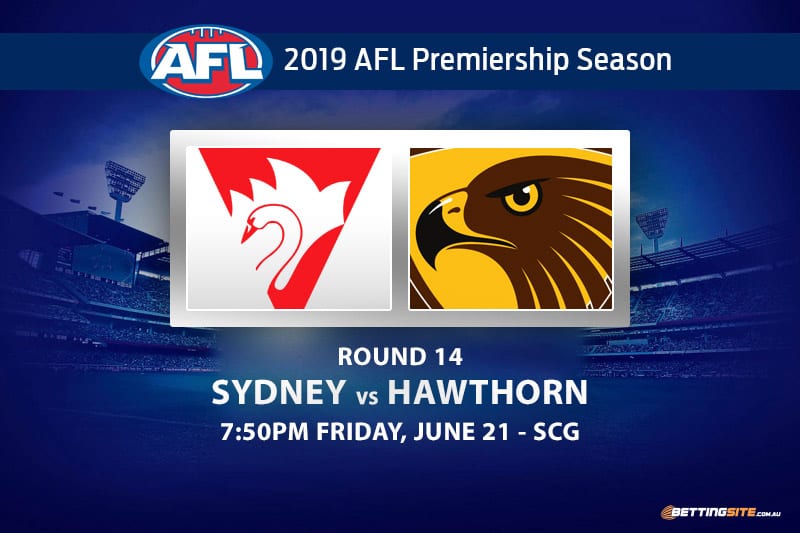 Whenever the Swans and the Hawks face off during the AFL season, you know the game is going to be close and exciting.

Sydney and Hawthorn fans will pack into the SCG to see another Friday night blockbuster between their two sides.

There have been small connections linking the Swans and the Hawks since the trade that saw current Sydney captain Josh Kennedy make his way to the NSW capital after his grandfather and father were both legends at Glenferrie Oval.

Then there is the small matter of Lance Franklin, who swapped brown and gold for red and white back in 2013 in one of the biggest trades in AFL history.

The last five clashes between these two great sides have been decided by under 10 points, with the Hawks winning four of the last five since 2016.

Sydney was able to defeat the West Coast Eagles by over seven goals before resting with the bye last week.

Hawthorn came out of the bye and lost to the Bombers in Round 13, forcing Alastair Clarkson to bring Jarryd Roughead back into the team.

Sydney vs Hawthorn Round 14 goalkicking tips

Tom Papley to kick two goals – Best odds at Ladbrokes
The young plumber has truly transitioned into a footballer in the past fortnight. Papley kicked five goals against the tight Eagles defence before the bye, topping the goal kicking alongside his mate Buddy Franklin. Papley has played more in the midfield this season but should push forward again with Zak Jones and Josh Kennedy returning from injury this week.

Jarryd Roughead to kick two goals
After a long stint in the reserves, Roughead is back playing senior footy. Not only will the former skipper make an impact with his leadership, his size and smarts will put him in a scoring position multiple times in this match. Roughead has been kicking goals ever since he joined the AFL and will boot a couple against the Swans.

Oliver Florent to get 20 disposals @ $1.62 with Sportsbet
In his two matches against the Hawks in 2018, Florent was able to gather 25 and 14 disposals, but he has been far more consistent this season as he is now a third-year player. Florent has tallied over 20 touches in his last two matches and in three of his last four games.

James Worpel to get 25 disposals @ $1.57
Worpel is only a second-year small midfielder, but the youngster has played every game this season and has yet to tally less than 20 disposals in a match. With a career high of 34 touches last week, the ‘Worpedo’ is running hot and will continue his excellent form.

Lance Franklin to kick five goals
Some journalists have dubbed this week’s match the Buddy Franklin Cup and we have a feeling he will play a great game. Franklin has not played against the Hawks since 2017 and should raring to go, especially since his old mate Roughead is back in the Hawks squad. The Swans are winning again and Hawthorn are missing their top defender, so the omens are good for Buddy.

Sydney vs Hawthorn Round 14 match betting

The suspension to Hawks captain Ben Stratton will affect the backline tremendously and put the Swans in a winning position. The Bloods are in form and should win this match with ease.