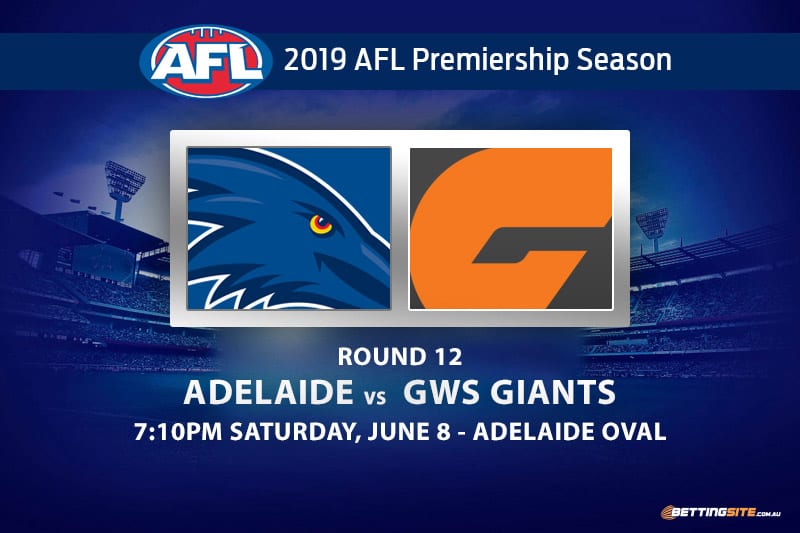 If there is a must-watch match in AFL Round 12, it is this clash between the Adelaide Crows and the GWS Giants at Adelaide Oval.

It’s a fact that beating the Crows on their home deck is one of the toughest tasks in footy, but the Giants might be the team for the job.

Leon Cameron and GWS have not put a foot wrong in the past month and will be extremely competitive against Don Pyke and the Crows.

Number one draft pick Lachie Whitfield is out for the next month after undergoing surgery on his collar bone, leaving room for some to step up on the wing for the Giants.

Adelaide came back from behind last week against the Demons and stole a victory, boosting the confidence of the players and staff.

The Giants have won their past two clashes against Adelaide, but the Crows won three in a row before that.

Anything can happen in this Saturday night clash and the winner will become a threat in the 2019 AFL Premiership betting.

Adelaide Crows over 11.5 goals @ $1.92 at Sportsbet
Adelaide has surpassed the 12-goal mark in three out of its last four matches and will do so again this week. The forwards are finally playing how they should and are working together like the well-oiled machine they once were. They kicked 14 goals from 20 shots last week, including a bag of three from Brad Crouch.

GWS Giants over 12.5 goals @ $2.05
The second-highest scoring team in the competition is the Giants, who sit behind the Cats by only eight points. When you average just under 100 points per match, you know the team is going to kick more than 13 goals. Adelaide is still without Tom Doedee, who is a very capable intercept defender, and his size would have helped against the Giants.

Brad Crouch to get 30 disposals @ $1.53
Three players that will take to the field this Saturday average 30 disposals per game and Brad Crouch is one of them. Only 11 players in the league average 30 touches or better, making this game one to keep an eye on. Brad has come alive in the absence of his brother Matt but will elevate again when his younger sibling returns this week.

Stephen Coniglio to get 30 disposals @ $1.72
With Lachie Whitfield out this week for the Giants, another midfielder needs to step up and fill the void left behind. Stephen Coniglio played one of the best matches in recent history last week, getting 36 disposals and kicking three goals in a 207-point SuperCoach performance. Another 35-disposal game ($3.25 at Sportsbet) is not out of the question.

Jeremy Finlayson @ $9.50
One of the big surprises of 2019 has been the emergence of Jeremy Finlayson as a key forward for the Giants. A former defender with a long left-foot kick, Finlayson struggled to down a starting spot last season before a masterstroke move to the forward line. He is averaging over two goals per game and starts as an early mismatch for some teams, including the Crows.

The Giants have been very strong in the past month and will continue their push up the Ladder. If the Crows play perfect football and utilises the absence of Lachie Whitfield, they may stand a chance, but last week’s poor first half gives us little confidence in them.