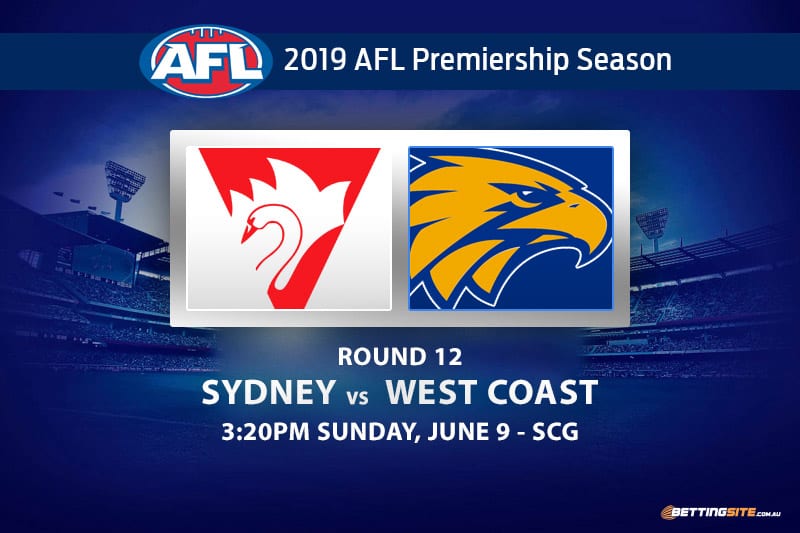 One of the AFL’s best modern-day rivalries involves two teams on opposite sides of the country.

It all started back in 2005 and 2006, when the Sydney Swans and the West Coast Eagles played in two consecutive grand finals, and six times across both seasons, with the highest winning margin only being four points.

This week they will do battle again at the SCG in Round 12’s only Sunday match.

To say the rivalry has softened in the past 10 years would be incorrect, as both teams tend to lift for this fixture and like to get physical early.

With the Swans sitting much lower on the ladder than in recent seasons, the contest is not making as much noise as it usually would, but both the Swans and Eagles know this match could go either way.

Jake Lloyd to get 30 disposals @ $1.62
Jake Lloyd has been a great defender for the Swans in this lacklustre season, averaging 31 disposals and not missing a game. With the Swans needing run off half-back in the absence of Zak Jones, Lloyd has been the main man. He had 34 disposals last week and will have a similar impact this Sunday.

Luke Shuey to get 30 disposals @ $2.37
It was back in 2017 when Luke Shuey last had 30 disposals against the Swans, but he is in red-hot form this time around. Shuey has been sharking opposition hit-outs very well in the past three weeks and will be looking to do the same to former Eagles ruck Callum Sinclair.

Lance Franklin to kick three goals @ $1.83 at Sportsbet
Last year Lance Franklin kicked eight goals against the Eagles in one match. In the return fixture he kicked two goals and five behinds. If Franklin kicks accurately in this match, he will easily be able to kick more than three goals.

Jake Waterman to kick a goal @ $1.45
Jake Waterman played in both matches against the Swans last season and was able to hit the scoreboard on both occasions. He went through a purple patch last week against the Bulldogs and kicked three goals, also gathering over 20 disposals in a very strong performance.

Jack Darling @ $21
An award is handed out at the end of every Sydney Swans and West Coast Eagles match for the player judged best afield. If Jack Darling can continue his blistering form after kicking six last week, he will be in the running at very decent odds.

The Eagles are the reigning premiers for a reason and some would say they have improved since adding Andrew Gaff back into the midfield. Sydney has been poor and we can now tip against them with confidence.