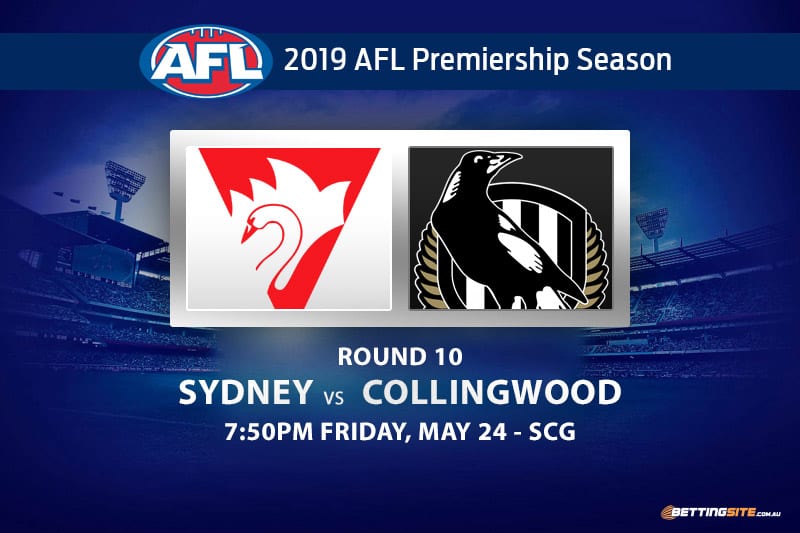 Sir Doug Nicholls Round will kick off this Friday night in Sydney when the Swans host the Collingwood Magpies.

One of the best matches from the 2018 AFL Premiership season was between these two sides, where a last-minute goal from Tom McCartin sealed the match against the unlucky Pies.

Times have changed and Collingwood now sit second on the ladder with seven wins, whilst the Swans are 14th with only three victories.

Big-name players are pushing to get back into the Sydney side before the selection cut-off, with Lance Franklin headlining the list.

Franklin, one of the all-time great indigenous players, has missed the last four weeks with hamstring trouble but is edging close to a return.

Collingwood will miss an indigenous star of their own, with Travis Varcoe suspended for a high bump, but half a dozen star Magpies are a chance to return.

The Swans have won their last two matches, including the controversial Essendon clash where Dane Rampe climbed the goalpost late in the game.

The Magpies are the team to beat, but they will be tested at the SCG this Friday night.

Oliver Florent to get 20 disposals @ $1.91 with Sportsbet
The third-year young gun has started to become an important player for the Swans, with multiple high-disposal matches so far this season. Florent has the ability to run all day and can smell a loose ball when others cannot. Florent was poor last year when they faced the Pies but has built up his confidence heading into this match.

Scott Pendlebury to get 30 disposals @ $3.30
Coming into round 10, Scott Pendlebury looks to be in rare form, similar to how he used to play back in the early ’10s. The Swans always negate opposition players, but with Adam Treloar and Steele Sidebottom in scintillating form, Pendlebury will receive less treatment, giving him the chance to have a big night.

Swans vs Magpies Round 10 goalscorer betting

Will Hayward to kick two goals
With Lance Franklin ruled out for the Swans, another forward will need to stand up and Hayward appears to be the man to do so. Sam Reid will be locked down from Jordan Roughead and will not dominate, leaving room for Hayward to take control. The Pies will need to defend very well in order to stop Hayward’s smart leads.

Steele Sidebottom to kick a goal
He kicked a brilliant goal last week and could have had three if he was selfish. The crafty Magpie has made a name for himself as a goal-kicking midfielder, as he finds space well and can finish with both feet. If the Swans do not treat Sidebottom as a forward, he will certainly kick more than a single goal.

Brodie Grundy @ $7 with Sportsbet
Only Swans players have previously won the Goodes-O’Loughlin Medal, which is given out at the end of every Sydney match during the Sir Doug Nicholls Round. Collingwood’s Brodie Grundy has been a giant in his last three matches and is averaging 57 hitouts per game in 2019. In contrast, Swans ruck Callum Sinclair is only averaging 16 hitouts.

The Pies have shown all season that it takes a four-quarter performance to beat them, which is why they are second on the ladder after nine rounds. Sydney will come close, as they have started to get rolling over the past fortnight.