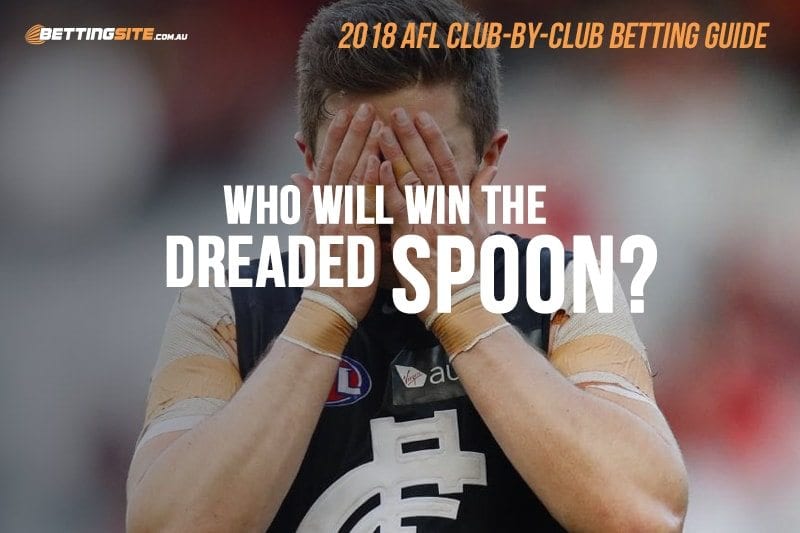 NOT every AFL team can be in contention for the finals and a taste of silverware.

Some clubs have internally decided that 2018 is not the time to win games, but to develop young kids and build towards a brighter future.

Then there are some teams that have reality and fantasy mixed up and have overrated their list all-together.

After reviewing the clubs in contention for the flag and those on the cusp of finals, we’re taking a look at the cellar dwellers to finish our review of each AFL club’s futures odds for the season ahead.

There’s an interesting market on offer here – least wins. These are the teams that are right on the money for this market.

The biggest shock of this group. After making finals last year, the Eagles just don’t fill us with any confidence after losing some veterans. Perth locals would certainly suggest that the likes of Jack Redden and Dom Sheed can fill the void left by Brownlow Medalists Sam Mitchell and Matt Priddis. The Eagles’ star power is still available if they are fit, but that’s off to a bad start with Nic Naitanui and Josh Kennedy certain to miss a few of the opening rounds due to injury. Luke Shuey will have to find the footy by himself and start to look for different options other than his mate Kennedy when streaming forward. An exciting target inside 50 for the Eagles – Dubbed the human highlight reel – Liam Ryan is going to impress anyone who’s watching. Ryan will fly at any footy and his work at ground level is exceptional, Liam did kick the most goals in the WAFL before being drafted at 26 in last year’s National Draft. The Eagles can definitely make an impact at home, but will they win enough games on the road to make an impact?

With a fit Nat Fyfe and Aaron Sandilands, the Dockers could really strive for finals in 2018. As has been the case for nearly half a decade, Freo’s forward line needs work. Cam McCarthy really needs to find some form and kick more goals if the purple haze wants to be successful again. With all the controversy surrounding former Gold Coast recruit Harley Bennell, the Dockers players still have faith that he can perform at AFL level without getting into trouble. If he shows as much commitment to the team as he does to his clubbing, drinking and fighting, he could become a star. Fremantle could still make the finals in 2018, they just happen to be the 14th most likely to do so.

The rebuild is almost over. With all the talent the Blues have collected in the past few years, they could cause many upsets in 2018. Former Hawks champ Dermott Brereton has stated that Charlie Curnow will become the best player in the league in the next three years. This is a massive call for such a young player, but from what he has shown so far, it’s not the most outrageous prediction. The Captains of each team participated in a recent poll and concluded that Charlie was set for the biggest improvement out of all the players in the league in 2018. After years in the wilderness, much to the joy of fellow Victorian clubs, the Blues could be set for real growth – another year of stagnation could put the pressure on coach Brendan Bolton.

One of the most underrated teams in the league and rightfully so. Brisbane is a few years behind everyone else in the competition due to an exodus of young stars over the last decade, but the culture is beginning to change. Coach Chris Fagan has developed a team that has a hard edge. Young guns Eric Hipwood and Huge McCluggage blend well with the older players like Dayne Beams and Dane Zorko and for the first time in many years, the future is looking bright for Brisbane fans. Alex Witherden is our personal pick for the rising star, his kicking is elite and he will look to use it at all opportunities. Brisbane won’t win many games in 2018, but expect significant steps towards respectability.

With the departure of Gary Ablett Jr, the Suns are now left with the crippling reality of yet another captain that will have millions of dollars hurled at him all year – Tom Lynch. The gun forward may leave if the Suns continue to stagnate on the field. What more motivation does a club need for improvement, other than to keep their best player and captain? The Gold Coast recruiting staff rate new man Lachie Weller very highly, they expect him to become one of their top midfielders – which you’d hope for, given they traded away the #2 draft pick for him. We’re tipping new coach Stuart Dew could have a difficult start to his career in charge up north.

There is a very big problem at Arden Street. You know your club is in trouble when the coach singles out the oldest player in the team and states that his best footy is ahead of him. According to Brad Scott, Jarred Waite at the age of 35, will get better in the future. How exciting. North Melbourne seem to be in no-man’s land and will require more top-end talent to regenerate its list. The youth that was blooded in a rough 2017 season doesn’t look fantastic and the club is bereft of star power. Expect the Roos to suffer in 2018 and the years to come.