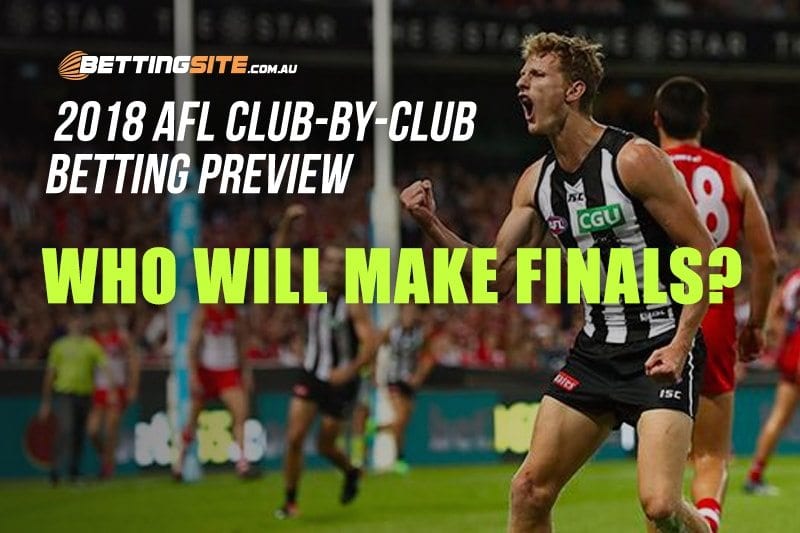 THERE’S no greater commodity in the AFL than hope.

Selling hope to players, supporters, sponsors and everyone else at a football club can be the key to success.

After starting our 2018 club preview with the premiership fancies, we turn our attention to the clubs with hope for success in the season ahead.

Depending on who you ask, these teams could win the flag or get the wooden spoon.

It’s all about whether these teams have luck with injuries and find improvement from within.

Who will make the finals from the teams below? Is there a potential premiership club in the group?

Let’s take a look and see what the bookmakers have to say.

The Demons failed in its bid to break their finals drought in 2018, which was especially disappointing after shipping out finals ticket-buying guides to members the week after an embarrassing loss to the Magpies in the final round. From what the club has shown this year in the JLT, they look better to take the next step and continue is development towards becoming a real contender. The recruitment of Jake Lever has been fantastic, alongside the drafting of Jack Watts’ replacement in mature age rookie Bailey Fritsch. Max Gawn is in full flight and ready for round one, as is Jesse Hogan, who suffered an interrupted 2017. There is very little to fault Melbourne for so far, it seems they’re serious and ready to break the club’s longest Premiership drought of 53 years.

Essendon won the fan’s vote for best recruiting coup of the summer with the inclusion of Jake Stringer, Devon Smith and the amazingly-underrated Adam Saad. If the Bombers middle tier and young core continue to develop alongside these additions, the club could be set for a massive 2018. Can coach John Worsfold harness the power of Jake Stringer? Will Joe Daniher become the game’s best key forward? After making the finals last season, Essendon’s 2018 fate is one of the most fascinating stories of the season.

How long can a hangover last? Doggies wayward midfielder Tom Liberatore can answer without hesitation, but in terms of footy, the Western Bulldogs will be hoping the time for celebrating its 2016 flag is over. The Bulldogs have shown previously that they can perform at the highest level and will back themselves to return to finals football this year. The players recruited are going to play a big part in any success. Hayden Crozier proved that a move to the half back will complement him, while former #2 pick Josh Schache should provide extra firepower forward and give Tom Boyd a well deserved break. The midfield is still very elite. The likes of Bontempelli, Macrae, Liberatore, Wallis and Hunter can easily get the Bulldogs back to the promise land in 2018.

The biggest dark horse in the history of footy. With literally everything going against them in 2018, we still have hope that the Pies can produce great footy. From what we saw in their second JLT practice match, the Magpies still have a huge Jekyll and Hyde element to their game. When they play well, the black and white can toy with any side, but the challenge is in finding that form consistently. Is 2018 they finally make a move up the ladder under Nathan Buckley? Expect Sydney recruit Sam Murray to star in the half back pocket, as he looks like a prolific user of the footy. Murray is also eligible for the rising star @ +2500 with Sportsbet.

Alastair Clarkson is the best coach in the league and, alongside his outstanding leadership group, the Hawks can once again make the finals. After three premierships in a row and one season out of the finals last year, it would be an incredible feat to jump back in, but Clarkson has made the right moves for a quick bounce. Jaeger O’Meara and Tom Mitchell look fit and ready to lead the midfield while James Sicily and Blake Hardwick have both become formidable defenders for the brown and gold. If the veterans of their premiership success remain healthy and the kids continue to develop, the Hawks can achieve anything. God help us all.

What to make of the Saints? After a frustrating 2017 in which they stagnated on the field, St Kilda couldn’t land any big fish during trade period and will need to rely on the improvement of its young, exciting core to take the next step towards its first finals campaign since 2012. Former #1 selection Paddy McCartin looks ready to take the mantle as the club’s key forward and veteran midfielder David Armitage looks free from injury. After losing stars Nick Riewoldt and Joey Montagna at the end of last season, the Saints need all the experience they can muster if they are going to make the finals in 2018.