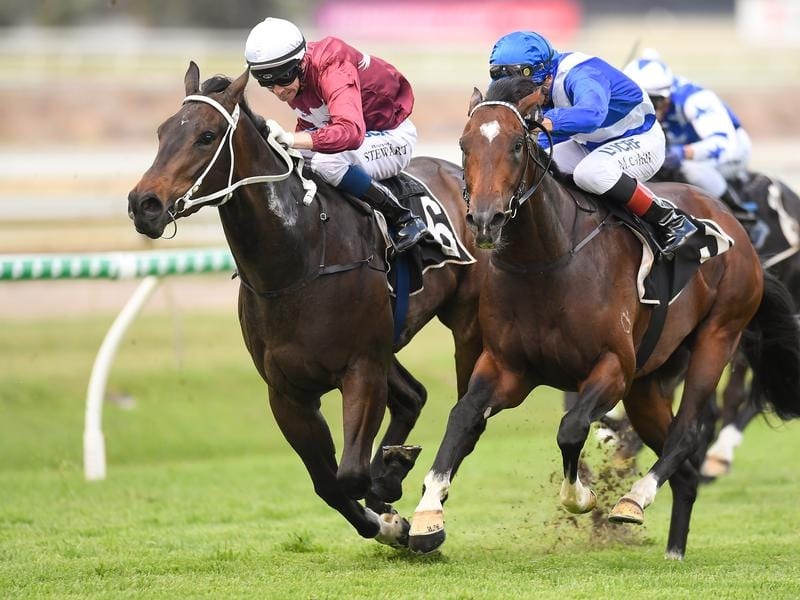 Xanthus (left) can help earn his way to the Magic Millions with victory at Eagle Farm.

The in-form Xanthus can ensure he has an easy path to the $2 million Magic Millions Guineas by winning at Eagle Farm.

Trainer Matt Dunn has always had high hopes for Xanthus who is by leading sire Better Than Ready and was considered good enough to be entered for the Group One Golden Rose in Sydney last month.

Dunn decided to take a more low key attitude to Xanthus’ career and will target the Magic Millions Guineas at the Gold Coast in January.

Xanthus has won both his races this campaign, the latest against a strong three-year-old field at Doomben.

“If he can win on Saturday it should give him enough prize money to make the field for the Magic Millions Guineas,” Dunn said.

“It would mean we don’t have to rush him to make the field and can give him an easier pathway into the race.

“I am sure the 1400 metres around the Gold Coast will be ideal for him.”

Ron Stewart who won on Xanthus at Doomben has retained the ride for Saturday.

“Ron has a bit of an opinion of Xanthus and was keen to retain the ride,” Dunn said.

Dunn paid $44,000 for Xanthus who out of Vis A Tergo, one of the first good horses he had as a trainer.

Vis A Tergo won five races including four in a row in Brisbane in 2013.