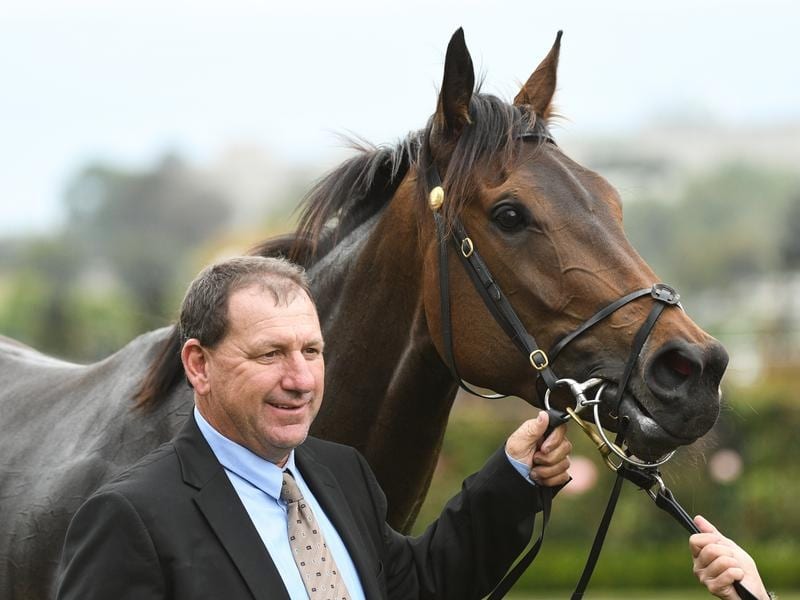 Wings Of Pastrami has given trainer Jeff Searle his first Flemington winner.

Talented filly Wings Of Pastrami has continued a rise through the grades to give Bordertown trainer Jeff Searle the thrill of his first Flemington winner.

Wings Of Pastrami ($6) was making her first Melbourne appearance in Saturday’s December Twilight Handicap (1400m) for three-year-olds and made it four wins from five starts, fighting back to get the better of Evening Glory late in the race.

The three-quarters of a length victory followed wins at Penola and two in Adelaide for Wings Of Pastrami this preparation and Searle said the filly had kept improving.

“When we won at Penola I didn’t think three starts later we’d be at Flemington,” Searle said.

“We galloped her on Tuesday and it was the best she’s ever worked. So she’s a horse on the improve.”

Searle said he had only ever had two other runners at Flemington, including Border Rain who was unplaced in a Country Final in July, 1997.

“We won a race at Moonee Valley with a horse called Tildy Lad last year,” he said.

“But this is my first Flemington winner. So this is great.”

Searle, who has eight horses in work at Bordertown, said Wings Of Pastrami was likely to have a spell before attention turned to some carnival races for fillies in Adelaide later in the season.

Star jockey Damian Lane believes Wings Of Searle is a nice filly in the making.

“She’s very raw and still doing a couple of things wrong so there’s more to come from her,” he said.

“That was no average off-season Saturday field either.”