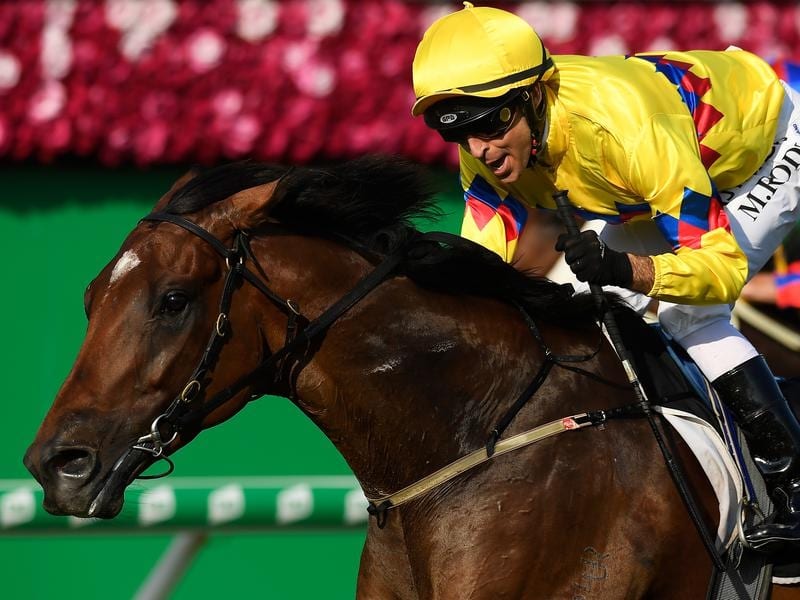 Vega One has earned a Stradbroke Handicap berth with his win in the $250,000 Gateway at Eagle Farm.

International jockey Michael Rodd completed a happy homecoming with a runaway win on Group One Stradbroke Handicap-bound Vega One who ran a track record at Eagle Farm.

Rodd did his apprenticeship in Queensland and rode in Victoria before heading to Singapore five years ago.

He finished his first day back at Eagle Farm with a double and the ‘Origin’ Jockeys Series title.

The race is a new one introduced by Racing Queensland to offer a ballot-free entry into the Group One Stradbroke Handicap in June.

The time of 1 minute 21.74 seconds bettered Trekking’s previous record of 1.21.86 in this year’s Stradbroke.

Trainer Tony Gollan has been aiming Vega One at The Gateway since the gelding returned from a spell and was even more confident when the sprinter drew barrier two.

Gollan’s plans were stymied to some extent when regular rider Baylee Nothdurft was suspended but he then learned Melbourne Cup-winning jockey Michael Rodd would be in Brisbane.

He rang Rodd in Singapore and quickly booked the jockey for the Vega One ride.

Gollan had a family commitment but stable foreman Craig Cavanough said it was easy to fill in.

“Tony has always said the key to this horse is drawing a barrier. As you saw today from barrier two he could sit behind the speed horses and then run on strongly in the straight,” Cavanough said.

“At 1400m he was always going to test these horses. He is pretty promising.

“Well now he has a ballot-free entry into the Stradbroke Tony can take his time with him. He might have one more run this summer but Tony will decide after seeing how the horse pulls up.”

Rodd led NSW to the State of Origin Jockeys title earlier in the day and was all smiles after The Gateway.

“We got a perfect run from the barrier and he is a horse with a lot of potential. You haven’t seen the best of him yet,” Rodd said.