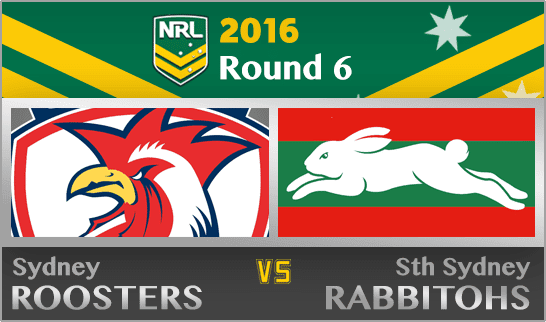 SOME of the sting may have been taken out of this game due to the Roosters’ horrendous start to the season, but never underestimate the intensity of a good rivalry on Friday night NRL.

The Roosters are win-less from five games after losing to the New Zealand Warriors in golden point time last week. They have had a couple of close losses to Manly and the Raiders, but a 40-0 drubbing at the hands of the Cowboys was tough to watch.

They will also have to overcome the mentality of having already lost to the Rabbitohs this season. Their round 1 defeat of 42-10 wasn’t the best way to start the season and they will be looking for revenge this Friday night.

The Rabbitohs have had an inconsistent season, but are still in a good position with a 3-2 winning record. Following poor losses to the Dragons (which haven’t scored a point since) and the Bulldogs, the Rabbits got a much-needed win against the Eagles last week.

Despite the lack of form from Australian and Queensland representative Greg Inglis, the Rabbitohs are moving along nicely and facing the worst team in the competition is a nice fixture.

The betting suggests this won’t be a cut-and-dry Rabbitohs win with support coming for the Roosters. Get the best NRL odds with Sportsbet.com.au and check in for its daily NRL specials.

Rabbitohs vs. Roosters betting and tips

We expected the Rabbitohs to be around the $1.30 range so this market is a touch suspicious. We watched on Monday night with the Raiders beating the Bulldogs after being shorter on the tote than they should have been.

This could be a similar situation here with the desperate Roosters seeking a much-needed first win of the season. Their star players will return later this season, but another loss could see them out of the running this week. Going 0-6 is almost impossible to come back from so the $2.72 is a good price for a team that will be striving for everything.

The points start line of +6.5 plays heavily in favour of Roosters punters as a close Friday night derby is expected. The Roosters could have easily defeated the Warriors last week and if they produce a similar performance on Friday, this game could come down to the final play.

Take the value on offer for the Roosters and cheer for the cellar-dwellers to notch their first win of the season. Roosters +6.5 at Sportsbet.com.au

We are on a good run with first tryscorer bets and that has given is confidence to have another go. The Rabbitohs have multiple tryscoring threats with Bryson Goodwin scoring three times in four games and fellow winger Aaron Gray having crossed the line four times.

They are the equal favourites to score first at $9.50 with the closest Roosters player being Shaun Kenny-Dowall at $10. There isn’t much value taking the $9.50 for Goodwin and Gray and we expect one of the unsung heroes to score first here.

Roosters fullback Latreil Mitchell has impressed in five games this season, scoring one try, and his form is improving week-by-week. The young Rooster is a solid chance of scoring first at $17 along with teammate Blake Ferguson who has scored twice this season.

Ferguson has long been labelled as a ‘rocks and diamonds’ player, but we’re hoping he is diamonds on Friday night. He is the type of player that can expose the young Rabbitohs outside backs and we think the $18 is a great bet.

Blake Ferguson is also paying $7 if he scores and the Roosters come up with the win. We think the Roosters will need to score plenty of tries to win and the floodgates could open up. If that’s the case, Ferguson should score and the $7 is much better than the head-to-head price on offer.

Alternatively, punters can take Blake Ferguson to be the first Roosters try scorer. Sportsbet is offering $8 for the centre to score first for the away side on Friday, which looks like good value.