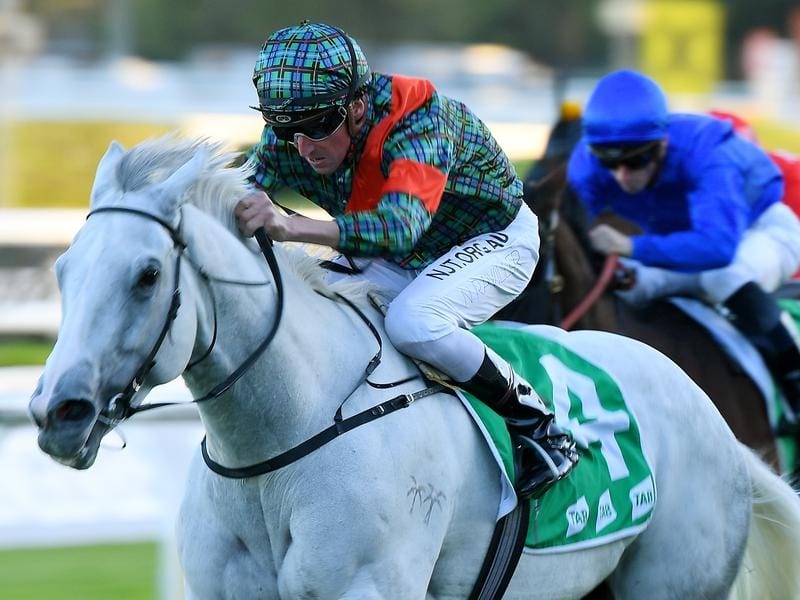 White Moss will be given another chance to snare an autumn Group One win in the All Aged Stakes.

The way White Moss has come through her Sapphire Stakes victory has paved the way for trainer Jason Coyle to run the mare for the third consecutive week in the All Aged Stakes.

White Moss won the Group Two Sapphire (1200m) at Randwick last Saturday for the second-straight year having finished unplaced a week earlier as a $151 outsider in the Group One TJ Smith Stakes, won by Nature Strip.

Coyle is happy to give the rising seven-year-old another crack at a Group One in Saturday’s weight-for-age All Aged (1400m), believing the mare is capable of another good showing this autumn.

“That was always going to be the determining factor, how she pulled up from her solid performance last Saturday,” Coyle said.

White Moss has won three times at Group Two level against her own sex in a career which has so far netted eight wins from 24 starts.

Her best result from five attempts at Group One level is a fourth in the weight-for-age Canterbury Stakes earlier this autumn.

Coyle was thrilled to see her notch another Group win last week.

“She’s a very good mare as her record would suggest,” he said.

“She’s been amongst some good company there so she’s among one of the better mares that I’ve had.

“When you’re winning one race every three starts over a career, it’s not bad going.”

White Moss is $41 in a star-studded All Aged Stakes but Coyle hopes the mare can defy her price and run a big race, believing the key will be getting into a good rhythm.

“I expect her to run a super race,” he said.

“Obviously you’re in uncharted waters when you’re running three weeks in a row but she tends to race very well at Randwick and we’ve had a little look at how she compares to a few of these runners.

“She ran well for third in a weight-for-age Expressway. She went to a Canterbury Stakes and was good in that.

“She lined up in the TJ and I think every one in that race had their hearts broken chasing a horse called Nature Strip and she probably struggled.

“But to be fair we had gone a month between runs into the TJ and she missed a trial when she was scratched at the barriers.

“So she was probably a touch soft and maybe she’s bounced into these next two races at her best. Hopefully that’s how it pans out.”