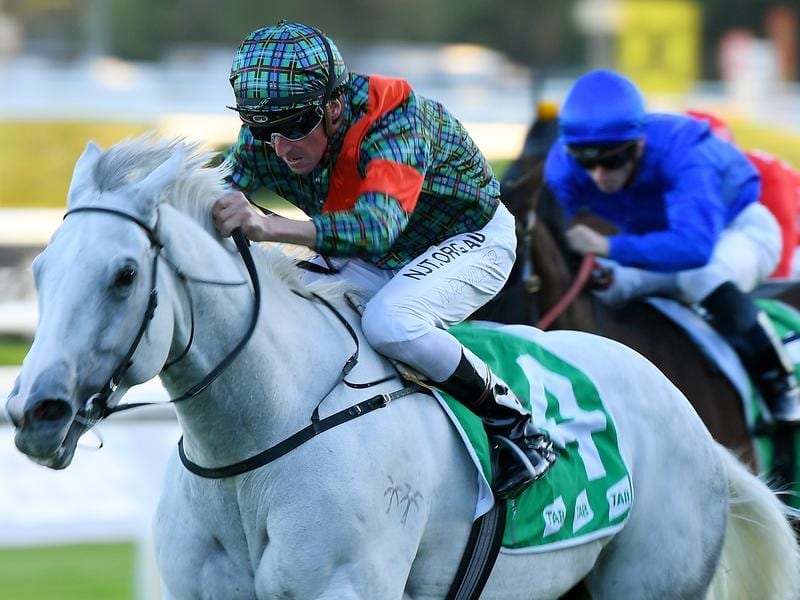 White Moss has made it successive wins in the Sapphire Stakes, a Group Two for fillies and mares.

Free-rolling mare White Moss has claimed successive wins in the Sapphire Stakes, appreciating a drop back to mares grade to lead throughout.

Having contested weight-for-age company at her past two starts, including an unplaced run behind Nature Strip in the TJ Smith Stakes, White Moss was back to her best in Saturday’s 1200-metre Group Two sprint at Randwick.

Allowed to roll to the front from a wide gate for Nash Rawiller, White Moss ($10) dictated terms and kept going to score by a length over Fasika ($3.40 fav) with Bangkok ($26) making ground another 1-1/2 lengths in arrears.

“She has been a wonderful mare for the stable. She has been racing in really good form in higher grade, it was nice to bring her back to mares’ grade and obviously the race panned out perfectly for her,” Coyle said.

“She probably left those barriers as good as she has this preparation and although it was a big field they sort of left her alone.

“When she can get those sectionals in front she always gives a good kick and gives her all so it’s nice to see her bounce back off the back of some good weight-for-age form.”

White Moss was a lucky pick-up ride for Rawiller after Glen Boss was double booked for first emergency Yamazaki and had to stick with that horse when it gained a start.

Rawiller let the mare cruise at her own pace and without the high pressure that comes with taking on a horse like Nature Strip, White Moss responded in kind.

“I basically just kept her in her own rhythm,” Rawiller said.

“In the TJ the other day behind a champion sprinter in Nature Strip, he just takes every horse out of their comfort zone and that’s exactly what he did to her and today she was right in her comfort zone and really enjoyed it.”

Rawiller book-ended the 10-race program after taking out the opening race aboard the Peter and Paul Snowden-trained Untamed.