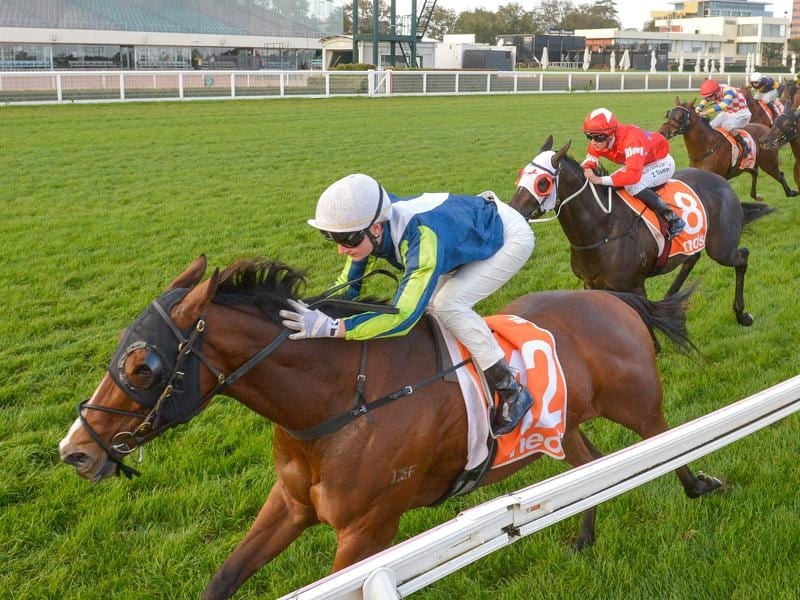 Bam’s On Fire has posted her most important win, claiming Group Three success at Caulfield.

Consistent mare Bam’s On Fire has scored an important win for her future as a broodmare with an all-the-way win at Caulfield.

Saturday’s win in the Elvis Thurgood 40th Anniversary Cup (1400m) was her first at stakes level after four placings in black type races.

Bam’s On Fire arrived at the stables of Ciaron Maher and David Eustace a maiden after five starts in Perth but has been a model of consistency for her new trainers.

The mare is trained from the pair’s Ballarat stable and in 14 starts has finished out of top three once while registering six wins.

Saturday’s race is registered as the Victoria Handicap, but renamed to acknowledge the 40th anniversary of Thurgood’s fall from Taras Regent in the Easter Cup, run earlier on Saturday, that left the jockey with spinal injuries and a severe brain injury.

Thurgood has been cared for by his parents Noel and Doris since and last year had his 60th birthday.

Eustace praised Kah’s ride as she landed a second victory in the race after winning on Sistine Demon in 2014.

“She got a beautiful rode out in front from Jamie, who is so good at rating them in front,” Eustace said.

“She was quirky when she came to us and she can hang and be a bit keen, but really, it’s just been a simple case of racing her and gradually stretching her out in trip.

“When we first got her you wouldn’t have thought you’d get her out to a mile, but she does get that now and she won over 1400 metres here.”

Eustace said Bam’s On Fire was likely to head to Adelaide for the Group Two Queen Of The South Stakes (1600m) at Morphettville on May 2.

Kah explained pre-race instructions from Eustace centred around finding the fence on Bam’s On Fire.

“He said she can hang in, but when she’s on the rail she’s dynamite,” Kah said.

“When she jumped so well I thought ‘why give up the beautiful lead’.

“Obviously the bias helped her, but she ran well in her own right.”