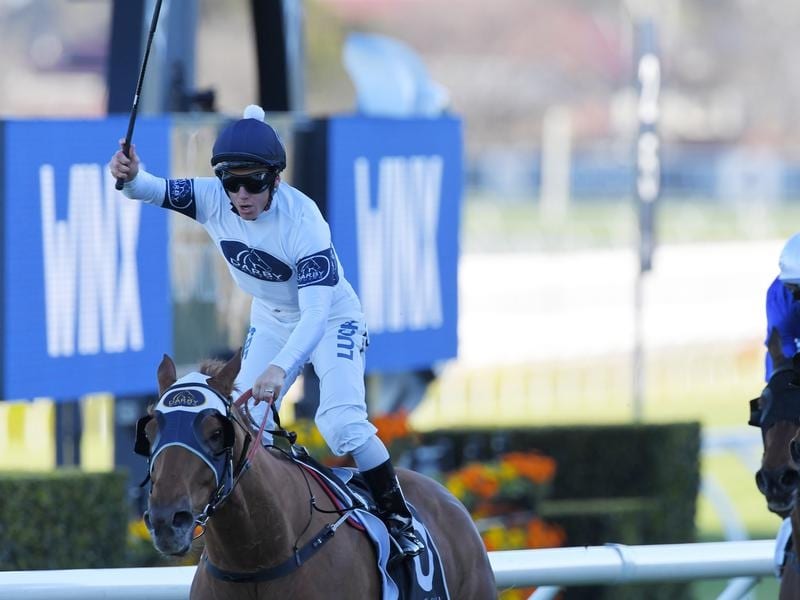 Jockey Tim Clark has no idea how Samadoubt will handle a wet track but knows he is in stellar form.

Tim Clark does not know how Samadoubt will handle a heavy track in the Group One George Main Stakes but he does know the horse is fit and in the form of his life.

The Bjorn Baker-trained gelding has been a revelation this spring, stamping himself as the form weight-for-age horse in Sydney with a surprise first-up win in the Group One Winx Stakes and backing it up with a similar frontrunning display in the Chelmsford Stakes.

Both wins were on firm ground and Samadoubt will almost certainly strike a heavy track at Randwick on Saturday, a surface he has been placed on just once in four attempts.

“At least he’s going into it in career-best form. I’m not sure if when he’s previously hit wet tracks he’s been in great form, so that’s one positive,” Clark said.

“It obviously changes things a little bit but he’ll roll forward and make his own luck again and give them something to catch.

“It’s just whether the wet track and a bit of extra fitness for a few others help them close that gap a bit on him.”

Godolphin’s Avilius has proven his affinity for rain-affected ground winning the Group One double of the Ranvet and Tancred Stakes on wet tracks in the autumn.

He has opened favourite at $3.20, ahead of Tramway Stakes winner Dreamforce ($4.60) and evergreen campaigner Happy Clapper ($5.50).

While Clark concedes Samadoubt faces a tough task on Saturday he says the horse is so well physically and mentally that he cannot be discounted.

“In the parade he looks spot-on. He’s in a good headspace at the moment and really in the zone,” Clark said.

“Fingers crossed he can do it again but it’s not going to get any easier, we know that. We’re just hopeful again that he turns up and runs well.”

Verry Elleegant, who is undefeated in two heavy track runs, is a $6.50 chance and the most fancied of Chris Waller’s three runners to give the trainer his sixth consecutive George Main Stakes success.

Touted as a potential Cox Plate horse after dominating the fillies staying races in the autumn, Verry Elleegant disappointed with her return in the Winx Stakes when she finished down the track.

Waller has subsequently tweaked her work with dressage training and says the George Main will be a fork in the road for the mare, determining if she presses on to the Cox Plate or Caulfield Cup, or takes a softer spring route through the mares races.