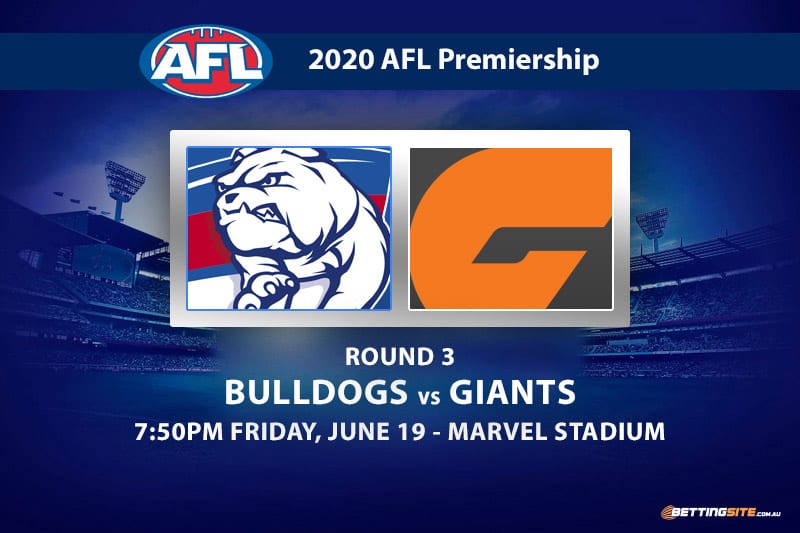 Friday night’s AFL matchup between the Western Bulldogs and GWS Giants at Marvel Stadium is one you cannot miss.

It has been a horrible start for Luke Beveridge and the Dogs, who followed up their heavy defeat to Collingwood in round one with another to St Kilda after the break.

Leon Cameron has also copped his fair share of criticism after the Giants were overrun by the Kangaroos while barely firing a shot in the last quarter.

Both sides were expected to feature in finals in this year, but the shortened season means they need to get their respective acts together ASAP.

Unfortunately for the Bulldogs, they’ll have to push through without former skipper Easton Wood and Taylor Duryea, who both suffered four-week quad injuries.

There were no new injuries for the Giants over the weekend, but they will still be without their 2019 best-and-fairest winner, Tim Taranto, who is still recovering from shoulder surgery.

Although the last three meetings have been blowouts both ways, this should be a closer contest between two teams that are desperate to get their seasons going.

One issue the Bulldogs had in their midfield last week was a lack of kicking, as they handballed themselves into trouble time and time again. Patrick Lipinski was one of the better ball-users on the night and looked smart with the footy. We see this season as a good opportunity for the young half-forward to nail down a spot in the first 22 with some consistent numbers.

Zak Jones and Jade Gresham proved last week that you can get lots of footy against the Bulldogs if you outrun their midfield brigade. Stephen Coniglio is as fit as anyone in the AFL and knows where to run outside of a contest. The GWS captain has not faced the Doggies since round one in 2018, when he had 32 touches in a best-on-ground display.

It is hard to find fault in Josh Dunkley’s game. The tough inside midfielder knows how to win the contested footy and pushes forward with purpose, kicking 37 goals from his 68 games. Dunkley once kicked four behinds in a match against GWS, so he is no stranger to scoring opportunities. If the Giants allow Dunkley to get the ball inside 50, he should kick a goal for the Dogs.

Looking at both teams’ forward and back lines, Jeremy Finlayson stands out as a player that doesn’t have an appropriate match up. The Bulldogs will be forced to play Alex Keath on Jeremy Cameron, leaving Finlayson with a smaller opponent. If the Giants move the ball fast and spot the mismatch, Finlayson will cause trouble early on.

Scoring has been the biggest issue for the Bulldogs this season, as they have only managed 83 points from their eight quarters of footy – the lowest tally of all teams by a wide margin. Both teams will put special attention on their defensive structures this week, which leads us to believe this will be a low-scoring affair.

Ladbrokes has given the Giants great odds to cover the 8.5 line, and we are jumping on. Everyone thought the Dogs would come out with a statement last week, but they were embarrassed. Although the Giants were poor against the Roos, we believe they will step up this Friday night with an emphatic performance.