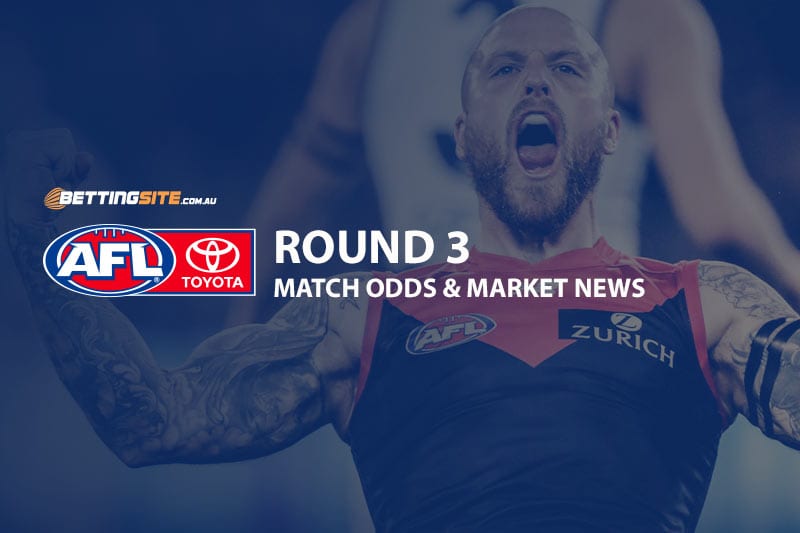 The long-awaited second round of the 2020 AFL season was everything we wanted and more. Now we take a look at the matchups and AFL betting odds for round three, which features a handful of clashes that could determine how serious the so-called contenders really are. All prices come courtesy of Sportsbet.com.au.

Although both sides were quite underwhelming in their first matches back, another week in training should help smooth out their skills. Richmond escaped with a draw against the Magpies in a match the reigning premiers probably should have won in the end. Jaeger O’Meara will push to return this week to bolster the Hawthorn midfield, which looked poor in Friday’s huge loss to the Cats. The Tigers at $1.39, putting the Hawks at $3 for the upset.

If there’s any team in the league that needs to stand up this week, it’s the Western Bulldogs. An embarrassing defensive performance against the Saints has put a heap of weight on Luke Beveridge’s shoulders. The Dogs start as $2.31 outsiders for Friday’s clash with the $1.59 GWS Giants, who need to lift after a shocking loss to the Kangaroos.

North Melbourne was one of the surprise packages from round two, surging home in the final quarter to beat the Giants on their own patch. The Sydney Swans narrowly lost to the Bombers after a scrappy slugfest, perhaps indicating they were a little underdone. With the absence of a key target inside 50, the Swans will find it difficult to get consistent effective entries. Rhyce Shaw’s Roos will start as $1.56 favourites, pushing Sydney out to $2.39.

It was 10 years ago that these teams drew in one of the best AFL Grand Finals in history, but a lot has changed since then. St Kilda was too fast on Sunday for the Bulldogs, who are known for their speed across the ground. Collingwood, the $1.39 favourite, will need to improve on Thursday’s performance to beat the Saints, who are very tempting outsiders at $2.94 in what might be the match of the round.

This will be a telling clash between two potential premiership contenders who were underwhelming in their comeback matches. The Brisbane Lions scraped over the line against Fremantle, while the West Coast Eagles were embarrassed by the Suns. The Lions have their nose ahead at $1.80 against the $2 Eagles, making this one of the closest markets in the round.

Saturday night clashes are normally prime time for AFL viewing, but this clash could get ugly very quickly. Carlton conceded 32 points without scoring in the first quarter against Melbourne, so there is no telling what will happen if David Teague’s men start slow against the Cats. Geelong starts as the rightful $1.14 favourite, leaving the Blues at $5.50 to produce a miracle upset.

We loved watching the Gold Coast Suns belt the Eagles last weekend; it was a big step in the right direction for Stuart Dew and his men. Adelaide was a rabble against its crosstown rival, conceding the biggest losing margin in the history of the SA Showdown. We like the Suns as $1.80 favourites against the Crows, who are lucky to not be further out at $2.

We still have no idea how to rate either of these clubs ahead of this clash. Essendon just about held on to beat a poor Sydney squad, while the Demons nearly lost to the Blues after starting the game with seven unanswered goals. Both sides will see this match as an excellent chance to prove their worth. The betting is close to 50-50, with the Bombers at $1.84 and Melbourne at $1.96.

Even though Fremantle lost its first match back, the effort against Brisbane did not go unnoticed. Port Adelaide looked like a squad ready for finals in its belting of the Crows, with the 2018 draft trio of Connor Rozee, Zak Butters and Xavier Duursma combining for 55 disposals and five goals despite the shortened game time. These second-year stars have pushed the Power into favouritism at $1.30, with the Dockers starting at $3.45.

When all four of the top contenders go the round without getting a win, the premiership market moves and shakes dramatically. The top end evened out between the Tigers and Magpies, whilst the Giants and Eagles have drifted slightly.

The most significant change of the round was Port Adelaide, which came into $14 from $21 last weekend to overtake the $17 Lions. The Kangaroos moved from $67 into $41 with their 20-point victory against the Giants, and that price could drop again if they beat Sydney this weekend.

Alastair Clarkson’s Hawks drew plenty of premiership money after their win over Brisbane back in round one, but they have blown out from $18 to $34 after their big loss to the Cats and could slide further with a loss to Richmond on Thursday night.