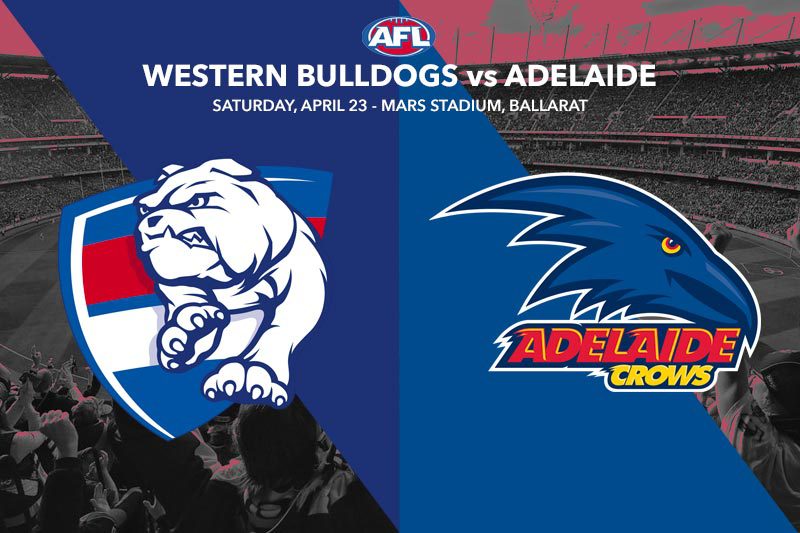 AFL footy will make its way over to Ballarat this Saturday afternoon for a big clash between the Western Bulldogs and Adelaide Crows at Mars Stadium.

Neither team currently occupies a spot in the top eight, but the Bulldogs and Crows have been two very exciting teams to watch so far this year.

Luke Beveridge’s Bulldogs are clearly not at the same levels as they were last season, but there is plenty of time for the 2021 grand finalists to put some wins on the board.

Although the Crows are currently 2-3 after the first five rounds, they have almost overachieved, losing two matches by less than a goal while knocking off the Power and Tigers.

The Doggies were back to something like their best in round five as they smacked the Kangaroos by 68 points, which could have easily blown out to a three-figure margin.

Lachie Hunter will not line up for the Bulldogs this week after announcing he will spend some time away from the club, leaving room for another midfielder to step up in his place.

Adelaide will also be missing a gun in the middle, as Rory Sloane has been ruled out for the season with an ACL injury.

Marcus Bontempelli and Rory Laird are two very different midfielders, but they are the two most important players heading into this match. Laird needs to lead the way for the Crows since Rory Sloane has been ruled out, while Bontempelli is in ripping form both in the middle and up forward. Many pundits made jokes about the Bont’s selection as an All-Australian forward in 2021, but the Bulldogs’ skipper is living up to the title after kicking a goal in every game so far this year. Laird works extremely hard to win the footy in the middle, but he does not have the same presence as Bontempelli, who can turn a game on its head with an important goal at any moment.

The Crows look much better in the forward half now that Taylor Walker is back in the line-up, as the former captain has kicked nine goals in two weeks while providing strong support up the ground. With Josh Rachele growing into a spectacular young player, the Crows have more than enough potency to kick a large score in any match. The 22.5 points at BetOnline is a generous handicap.

Bailey Smith put together a massive 43 disposals against the Kangaroos last weekend, which was a career high for the emerging star. Smith has surpassed the 30-disposal mark in each game so far this season, and that trend should continue for a few more weeks while Lachie Hunter remains sidelined.

Trust in the Crows’ forward line to kick a big enough total to keep them within reach of the Bulldogs, while Bailey Smith and Marcus Bontempelli should shine in Ballarat.