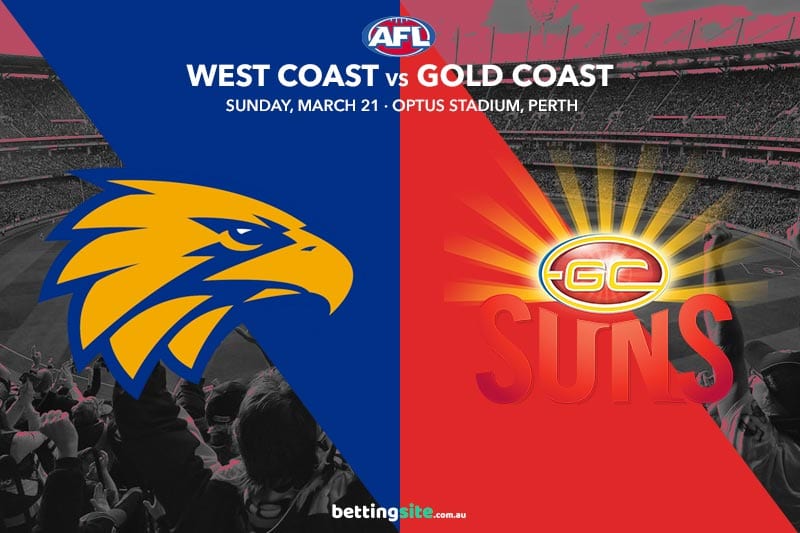 The West Coast Eagles will welcome the Gold Coast Suns to Optus Stadium this Sunday night in the final game for round one of the 2021 AFL Premiership season.

The Suns belted the Eagles by 44 points last year in one of several unflattering results for West Coast during the team’s spell in the Queensland hub, so you can bet Adam Simpson and his charges will be eager to set the record straight this weekend.

The Eagles have put together a very strong preseason, while the Suns are one of the dark horses this year, so it is shaping up to be an intriguing contest.

One of our favourite matchups of the week sees the up-and-coming Sam Collins taking on two-time Coleman Medal winner Josh Kennedy. Collins is an old-school, no-fuss defender that simply gets the job done most weeks, and this will be one of his toughest assignments of the year. Kennedy declared himself fit to play during the week after carrying a few niggles through the preseason, so the onus is on him to deliver the goods.

When you look at the West Coast Eagles, they have no weak links across the ground. Their midfield is supreme, the backline is as strong as ever with Jeremy McGovern and Tom Barrass running the show, and their forward setup is one of the most dangerous in the game. With normality returning to the AFL and teams not needing to stay in hubs, the Eagles may be one to keep an eye on. Leading AFL betting sites have them at $10 to win the flag, but that price could drop sharply with a few big wins early in the year.

Betting on the Suns will be an interesting activity in 2021. They will punch up against some of the stronger teams in the competition, but they will also fall flat some weeks like you might expect a young squad to do. Knowing they smashed the Eagles last season will give them confidence, and depending on how much their talented kids have developed in the last 12 months, we could see the Gold Coast spring an upset once again.

Matt Rowell to get 25+ disposals

If there is a stock to invest in before the season begins, his name is Matt Rowell. The no.1 draft pick from 2019 started his debut season with three consecutive best-on-ground performances from rounds two to four, including a breakout match against the Eagles where he had 28 disposals and kicked two goals. Rowell has grown in size over the offseason and is hungry to make an immediate impact having missed so much of 2020 with a shoulder injury.

With Sam Collins locked into either Josh Kennedy or Jack Darling, Oscar Allen will match up with a shorter opponent. The tall forward kicked two goals against the Suns last year and finished the season with three straight multiple-goal performances, so he is one to watch this week and throughout the season for the Eagles.

Even though the Eagles will be at home under the lights at Optus Stadium, the Suns should put up a huge fight, which is why we have taken them at the line. Since Luke Shuey and Elliot Yeo will be absent from the Eagles midfield, Rowell should thrive at the stoppages.