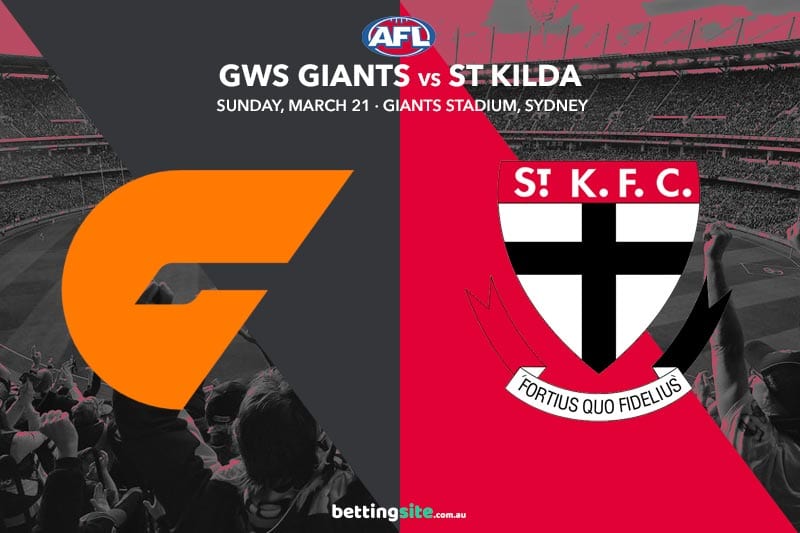 The main event on Sunday afternoon in the AFL is the matchup between the GWS Giants and St Kilda at a damp Giants Stadium. The last time these two sides met, the Saints towelled up the Giants by over 50 points in their final home-and-away game of the 2020 season, so it goes without saying that GWS will be wanting to put in an improved effort this weekend.

With the Saints missing several key players for their Round 1 assignment, it is no surprise to see them as $2.28 outsiders with leading AFL bookmakers. The Giants have injury concerns of their own, however, and their odds of $1.63 may drift out a touch as we approach the first bounce.

They are two absolute bulls in respective midfields, so Jacob Hopper and Jack Steele will be pivotal to both sides’ chances on Sunday afternoon. It is expected to be a damp old affair on Sunday, so it should suit their gamestyles perfectly. They are the ones always at the bottom of the packs, and they both know how to accumulate possessions.

Steele is coming off a breakout year, and the former Giant will be wanting to show his old side what they are missing out on. Hopper only averaged 19 touches a game last year and was one of the more notable drop-offs for GWS, so he be eager to start the 2021 campaign on the right foot.

Online bookmakers are offering up to $3.60 for Steele to gather 30 or more disposals this Sunday, and we are backing him in based on his 25-possession game against the Swans in the preseason. Steele will most likely get Matt de Boer following him around all afternoon, but we like the $1.91 on offer for him to sneak forward and kick a goal given he booted a brace the last time these sides met.

Despite losing key players such as Jeremy Cameron and Zac Williams in the off season, the Giants will be looking to put an insipid 2020 season behind them and kick off on the right note. The $3.10 odds at Sportsbet for the Giants to win by 1-24 points are hard to ignore for value, especially given the heavy rain forecasted in the lead-up to the match.

Considering how easily they put the Giants to the sword on Friday night footy in Round 18 last year, the Saints should feel confident heading into this clash. It is shaping up to be a close game in tough conditions, so we are more than happy to take the +7.5 line for St Kilda.

Under 157.5 total points
With up to 100mm of rain expected in Sydney on Saturday and further showers forecasted for Sunday, it is hard to see how this match will be high scoring. The Giants will have worked hard on the defensive woes from last year in the offseason, and the Saints have an underrated backline that knows how to shut down opposition forwards.

Love him or hate him, Toby Greene is up there as one of the stars of the competition. During the offseason the Giants elevated him to the vice-captaincy, and that responsibility is only heightened by the departure of Jeremy Cameron and the injury to Jake Riccardi. We are backing him to thrive in the wet conditions, and as one of the most reliable shots at goal, the Saints would not want to give him an early look.

They say wet-weather footy is ugly to watch, and we are anticipating this one to be a low-scoring arm wrestle right until the end. With no Heath Shaw or Zac Williams in the Giants’ back half, Dan Butler will prove hard to shut down in conditions that should suit him. Nevertheless, we think the Giants will get over the line as they look to bounce back from a horrid 2020.