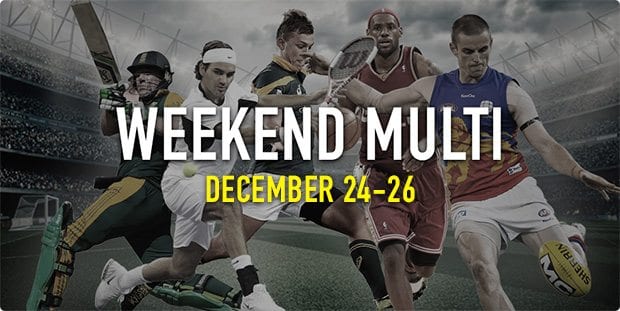 CHRISTMAS is right around the corner, but that doesn’t mean the sporting action stops for even a second.

We have horse racing, cricket in the form of the Big Bash and the Boxing Day test, as well as the A-League, Premier League, NBA, NFL and the Sydney to Hobart yacht race to enjoy over the course of the weekend.

It’s going to be one hell of a ride for sports fans and of course we have poured over all the events and put together a strong multi that should help alleviate that post-Christmas hangover.

All odds for this weekend of action were provided by Sportsbet.com.au, who is offering punters a fantastic inducement for those yet to sign up.

Multi selections for the December 24-26 multi:

Christmas Eve racing takes place at Rosehill this weekend and we are looking towards an inform runner to win the feature race of the day.

Snoopy is on a two-race winning streak. The four-year-old has shown tremendous versatility throughout its career and it will take an incredible horse to stop it from getting to a trifecta of wins.

We are backing Snoopy to make it three in a row to round out a fantastic tail end of the year.

The resurgent Aussies head to the MCG for the traditional Boxing Day test against the team they should have hammered last time out in the form of Pakistan.

The Australians controlled the last test at the GABBA from start to finish, but left it until late in the piece to bowl the visitors out to secure the win.

We are not too worried about what Pakistan will potentially take out of that, the Aussies were in a rut and needed to find their winning groove again.

Regaining that winner’s mentality was always going to be Australia’s biggest challenge after a tough set of test matches, but we are confident they can make it two from as many matches against Pakistan in Melbourne.

Third leg of the weekend multi sees the Reds hosting the Potters at Anfield.

Stoke is winless from their last three matches while Liverpool’s last outing was a heart stopping win against Everton in the derby.

The home side has won five of the last six matches between the two teams and has a 15 game unbeaten run at home. The Reds should sweep Stoke aside to keep our multi rolling.

The best team in the A-League in the form of the Melbourne Victory host the bottom of the table Central Coast Mariners in what should be a walk in the park for the home side.

The Victory have taken all before them in the last month, including an incredible come from behind win over City last weekend.

The Mariners are on a three game losing streak in where they have conceded nine goals. They are the worst performed team over the last month by a long margin.

This looks to be a formality. Victory should finish off our weekend multi in style.