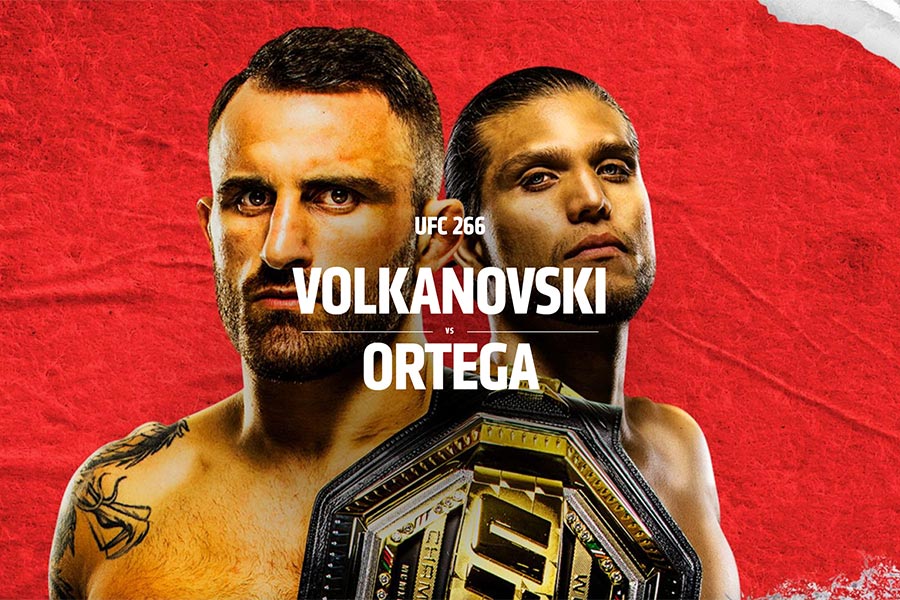 The main event of a stacked UFC 266 card features a UFC Featherweight Championship matchup between Alexander Volkanovski and Brian Ortega. These two top featherweights will clash in front of a sold-out crowd in Las Vegas this Sunday (AEST).

Alexander Volkanovski (22-1-0) has reeled off 19 straight wins since the only loss of his career back in 2013 in a stretch that includes a perfect 9-0 record in the UFC. Volkanovski defeated Max Holloway to win the UFC Featherweight Championship at UFC 245 in 2019 and successfully defended his title in a controversial split-decision win over Holloway at UFC 251 last year. The champion’s ability to maintain an extremely high output on offence while also being able to go 25 minutes will make him an extremely tough out.

Brian Ortega (15-1-0) looked fantastic in his win over Chan Sung Jung last October. After being out of action for nearly two years, Ortega returned in style by completely dominating his fight against a dangerous opponent. The victory earned him this shot at the championship in what will be his second career title fight. The only loss of Ortega’s career came in his last championship bout against Max Holloway at UFC 231 in 2018.

Brian Ortega’s strong showing against Chan Sung Jung was a departure from some of his previous fights in which he took the lion’s share of the damage before eventually coming from behind to score a finish. Before that decision win, each of Ortega’s previous six victories had come by his hands with three knockouts and three submissions. Has his game improved that much, or did he just have a great night against the Korean Zombie?

Either way, we are rolling with Alex Volkanovski here. Max Holloway was robbed of victory in his last fight against Volkanovski in the eyes of many after thoroughly dominating the first two rounds. But whether you agree with the decision or not, the fact that Volkanovski was able to overcome that early onslaught and fight as well as he did in the final three rounds says a lot about the champion.

He seems to be slightly undervalued here as bettors may still be holding a grudge from the Holloway fight. Ortega is a dangerous finisher that could steal this fight with a well-timed strike or submission manoeuvre. But Volkanovski’s defence and elite skills both on and off the mat will make the path to victory for Ortega a difficult one, and the Australian should earn enough points with his leg kicks and striking output to grind out a win.