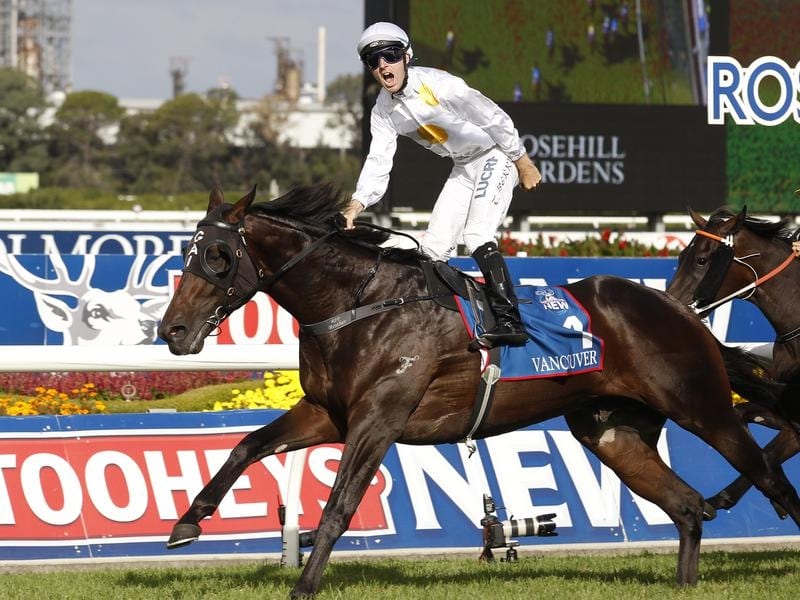 Golden Slipper winner Vancouver is off the mark as a sire with Vangelic scoring at Randwick.

Vancouver is off the mark as a sire with Vangelic giving the former champion two-year-old his first winner in a race ending in disappointment for another big name.

Yumi, a grand-daughter of Black Caviar, was the dominant $1.85 favourite to make a winning debut in Wednesday’s 1100m-race for two-year-old fillies but was eased out of the race by Kerrin McEvoy who sensed something was wrong shortly after the start.

Yumi appeared to stumble coming out of the barrier and put in a couple of awkward strides which prompted McEvoy to pull her up.

By Lonhro out of Belle Couture, the Peter and Paul Snowden-trained Yumi was subsequently found to be lame behind with a suspected pelvic injury and taken to Randwick Equine Centre for further assessment.

Paul Snowden said the injury did not seem too serious and he hoped that was the case.

Belle Couture went to the races four times for one win and a second and Yumi is her third foal.

Yumi’s non-participation left the other seven fillies to fight out the race with Vangelic ($11) proving superior by 1-1/2 lengths over Parakeet ($6).

Vangelic is trained by Gai Waterhouse and Adrian Bott while Waterhouse trained Vancouver to win four of his five starts, most notably the 2015 Golden Slipper.

Her jockey Nash Rawiller rode Vangelic when she finished second in a barrier trial on December 5 and was surprised by the improvement she had made between then and race day.

“She is still a bit babyish,” Rawiller said.

“I think she is still six months away. Her trial was good but Gai and Adrian have taken her home ans she has improved a lot.

“I was very surprised. She put the sword to them at the top of the straight.”