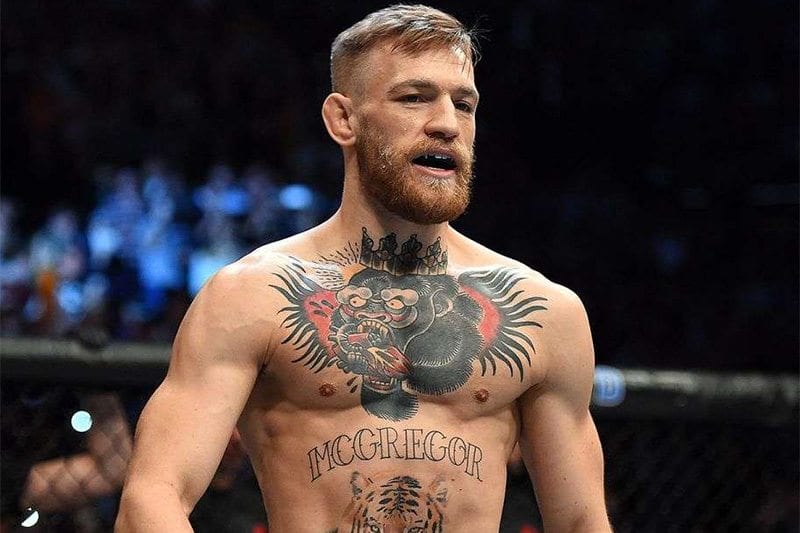 HOW do you possibly follow the ‘fight of the century‘?

That’s the question for Conor McGregor and his camp following the MMA champ’s first foray into boxing against Floyd Mayweather at T-Mobile Arena on Aug 26, 2017 in Las Vegas, Nevada.

Cashing in on a reported $100 million for his part in one of the most-watched and gambled-on fights in history, McGregor succeeded in creating a respectable spectacle and will now enjoy the spoils of his defeat.

Importantly for McGregor’s reputation and ‘brand’, he handled himself well in the fight.

While he may not have looked like a seasoned boxer, Connor took it to the 49-0 veteran early in the fight, clearly winning the first three rounds and posing serious questions of his opponent.

In the end, Mayweather’s experience came to the fore, as he withstood the early onslaught from McGregor and picked up the pace in the later rounds against the tiring Irishman, earning a technical knockout victory in the 10th round.

When and where is Conor McGregor’s next fight?

Conor McGregor’s next fight is for the lightweight title at UFC 229. The fight is at T-Mobile Arena in Las Vegas and is on October 7, 2018.

Who is Conor McGregor’s next opponent?

The man is familiar to MMA fans, but the casual fan could be forgiven for not knowing the name Khabib Nurmagomedov.

The man they call The Eagle is a one man wrecking ball and grapping giant. Boasting a record of 26-0, the current UFC lightweight champion has made a habit of mauling opponents by taking them to the ground and beating them into submission.

Conor faces arguably the toughest challenge in his MMA career, but stepping up to the plate is somewhat of a McGregor trademark.

Will Conor vs Khabib be the biggest UFC fight in history?

Dana White on Khabib vs McGregor:

"I'm confident it will do 2 million PPV buys. Believe me when I tell you, this will be massive. It’s going to blow people away how big this event will be."

It was a long-time coming for Conor McGregor fans but the Irishman’s upcoming superfight against undefeated Russian Khabib Nurmagomedov will be worth the wait.

There’s been a distinct lack of media attention in the build up to this fight compared to the usual Conor McGregor circus, but that doesn’t mean the fight won’t break all kinds of records.

In fact, UFC president Dana White is predicting that this fight will be the most watched bout in the company’s history.

“There was really no problems putting this fight together. It’s what makes Conor McGregor such an international superstar. This guy fights anybody, anywhere, any time. After a two-year layoff, he comes right out of the gate and wants Khabib and Khabib, who’s undefeated and obviously destroyed everybody in front of him, wants this fight now and wants to defend his title against Conor McGregor.”

We all know Dana loves hyperbole when it comes to PPV numbers, but it’s hard to disagree with the president on this one.

Can Conor McGregor win in his UFC return?

While Khabib Nurmagomedov is a formidable opponent, Conor McGregor possesses both the skill and the fortitude to hand the Russian his first ever defeat.

The Notorious One has the best stand up arsenal in the fight game and has never lost a UFC title fight. The last time McGregor fought for a title he completely outclassed Eddie Alvarez in a bout that many expected the American to dominate.

The consensus is the longer the fight goes on the worse it will be for Conor, but the Irishman has the ability to end this one in the opening round.

Betting odds for next McGregor fight

The betting markets typically sleep on Conor McGregor in the big bouts, and UFC 229 is no exception.

The former lightweight champion is undefeated at the weightclass, yet McGregor still goes into the weekend’s bout as the $2.35 outsider at Sportsbet to reclaim the gold.

Khabib Nurmagomedov is the raging $1.60 favourite to successfully defend his belt for the first time.

Will Conor vs Nate 3 happen?

The stars will have to align for the pair to meet in the octagon to complete the trilogy but we cannot categorically rule it out.

McGregor has his hands full with Khabib Nurmagomedov at UFC 229, while Diaz faces a stern test in the form of Dustin Poirier on November 4, where Nate is the $2.75 underdog at Bet 365 to register a return win.

If both McGregor and Diaz are able to overcome their next opponents are money will be on a deciding third fight, most likely for the lightweight title.