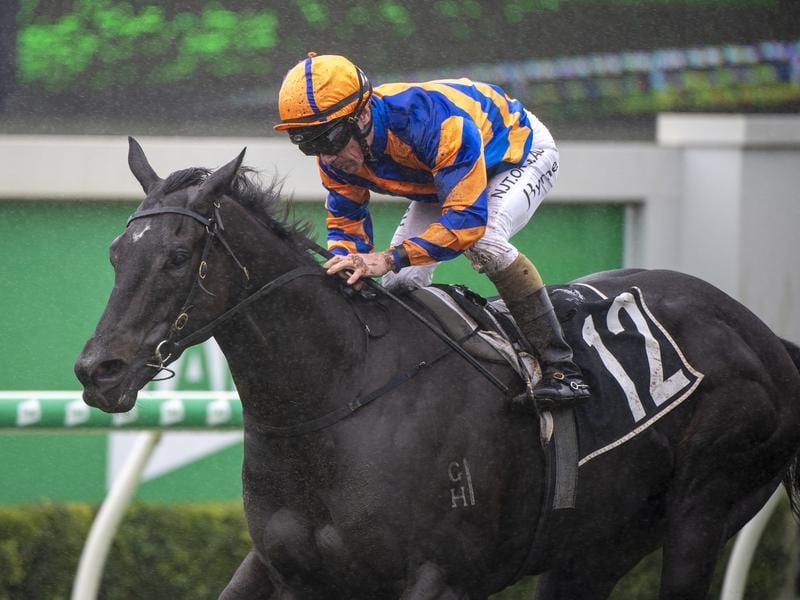 Tullio recorded the fourth successive win of his return to racing after a career-threatening injury.

Promising gelding Tullio has completed a marvellous comeback from a career-threatening injury with his fourth straight win at Doomben.

It was feared Tullio would be unable to race again after he needed knee surgery to remove a chip after finishing second at Eagle Farm in December, 2018.

After the procedure Tullio was eased back to the track with a program of swimming and walking.

Tullio resumed successfully on the Gold Coast in early June and subsequently racked up three more wins, culminating with the Kirin Handicap (1050m) on Saturday.

Tullio, the equal $4.40 favourite, sat behind the pace and powered clear to beat stablemate Howwonderfullifeis ($4.40) by 3-3/4 lengths on a heavy track.

“It is a credit to the staff for the hard work everyone has put in with him,” Cavanough said.

“It is great to see this horse living up to his potential.”

Winning jockey Jim Byrne said Tullio got a perfect run behind the pace and always had the leaders covered.

But the mare had been struggling in Sydney before being sent to Eagle Farm-based Steve O’Dea.

His stable foreman Matt Hoysted said Kylease should more than pay her way in Brisbane after impressing in her first start.

“Joe had a really big opinion of her but she was just struggling down there,” Hoysted said.

“It is easier in Brisbane and we have a lot of races for mares.”

Gelding Stardome, the joint $4.60 favourite, scored a 3-1/2 length win over Prince of Arran ($31) in the BRC Membership Hcp (2000m) to notch the 43rd metropolitan win for Waller’s Gold Coast stable this season.

More than have of the victories have been recorded in staying races.

“Stardome has been most consistent and (jockey) Larry (Cassidy) got him into the perfect position and that was all he needed,” said Waller’s stable manager Paul Shailer.