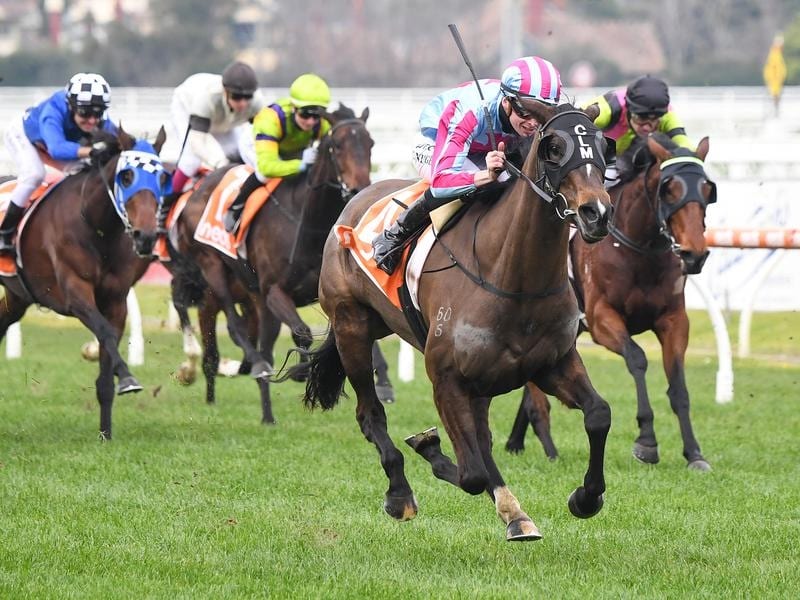 Progressive staying filly High Emocean has continued her own winter rise through the grades and in the process ended the winning sequence of her stablemate Persan at Caulfield.

Persan was chasing his fourth-straight city win this winter and fifth victory in his past six starts in Saturday’s Mark Needham Handicap (2394m) for three-year-olds in which he had to lump top weight of 62kg.

The Ciaron Maher and David Eustace-trained Persan started the $3.80 favourite and settled just off the pace with last-start Caulfield winner Lord Bouzeron rolling along out in front, while High Emocean ($5) settled in the second half of the field under apprentice Teo Nugent.

Persan travelled into the race strongly approaching the home turn and levelled up to Lord Bouzeron early in the straight before racing to the front.

But High Emocean, carrying 8kg less than her stablemate, finished the stronger out wide to defeat Persan by two lengths, with Lord Bouzeron another 2-1/4-lengths away third.

It was High Emocean’s third win in a row after victories in a benchmark-58 at Echuca over 2100m in May and at Sandown in benchmark-78 grade against her own age over 2400m last month.

“She doesn’t put herself into a race, which is fine but she relies on a bit of tempo which there was today,” Eustace said.

“Teo kept her in a nice rhythm and she enjoys finishing over the top of them. So there’s more to come.”

Eustace said they would have to talk to connections about immediate plans for the rising four-year-old but he believes she is a genuine staying type.

“He almost always travels strongly into a race and then gets left in front and I don’t think that really suits,” Eustace said.

“The better the race he runs in and the stronger tempo, I think the better horse he’ll be. We still feel he’s going to step up into a decent race and when he does that he’s only going to come down in the weights which will make life easier for him as well.

“He lost nothing in defeat. They’re both going well.”

It was the second one-two finish of the meeting for the Maher and Eustace stable after two-year-old Flinders River defeated stablemate Galactic Fury in the VOBIS Gold Ingot (1400m).