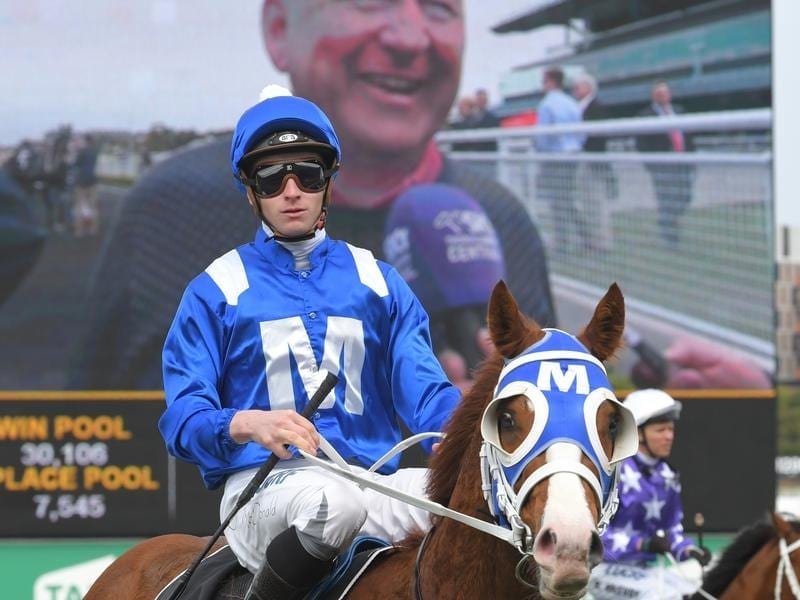 Carrying silks made famous by Winx, Tough Larry has scored an emotional win at his first start.

A horse carrying the colours made famous around the world by Winx has scored an emotional win on debut at Randwick.

Winx’s co-owner Peter Tighe has a share in the Chris Waller-trained three-year-old Tough Larry and the gelding races his blue and white silks.

His other owners include members of the Hughes and Callander families who have been touched by brain cancer and are active in raising money for research and awareness.

Ridden by James McDonald, Tough Larry ($4.80) beat his stablemate Voila ($5) by a half neck with another stablemate Altair, a $3.70 equal favourite, a further half neck third in the 1150m maiden on the Kensington track.

“The Winx colours make it special with Peter Tighe in the ownership.”

Former NRL player Mark Hughes was diagnosed with brain cancer in 2013 and established a foundation in his own name.

“He is a very kind and very willing and has matured mentally,” he said.

At the other end of the experience scale, seven-year-old Prince Mayted has staked a claim for The Kosciuszko with his 1000m win on Wednesday.

The $1.3 million race is for country-trained horses on The Everest program and Wauchope’s Colt Prosser believes the gelding deserves a chance.

It was the ninth win for the 48-start veteran who has also recorded 20 minor placings.

Tickets are on sale through TAB outlets and 12 will be drawn on September 14 with the winners to negotiate with the connections of horses they nominate for slots in the Kosciuszko field.