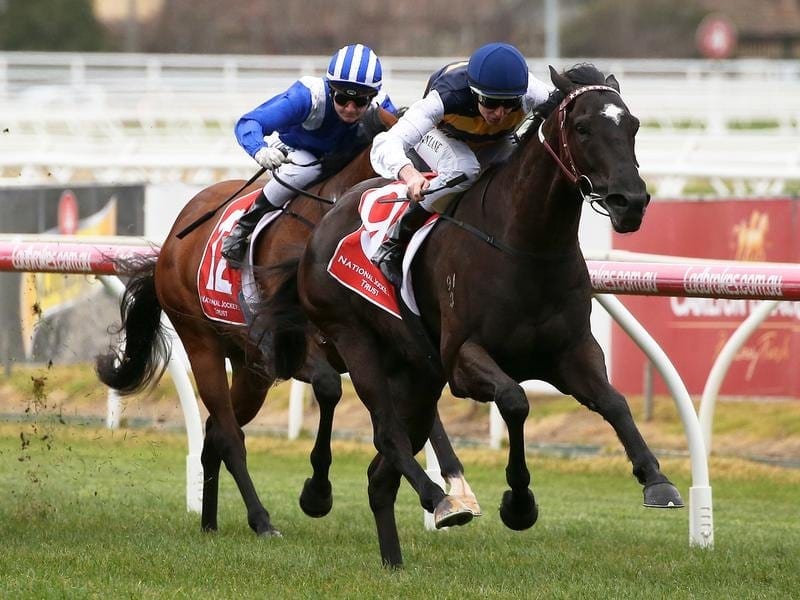 Exciting prospect Night’s Watch is the early favourite to secure a ballot exemption into several spring features when he steps up to Group company for the first time in the Dato Tan Chin Nam Stakes.

Night’s Watch is scheduled to back-up in Saturday’s 1600m weight-for-age race at Moonee Valley after an impressive win in a 1400m open handicap last week at Caulfield.

He was the $3.30 favourite on Wednesday in a field of 11 for the Dato, and trainer Darren Weir is keen to get Night’s Watch into the $5 million Caulfield Cup (2400m) this spring.

Saturday’s race could achieve that as the race carries a ballot exemption for the winner into the Caulfield Cup, as well as the Cox Plate.

Night’s Watch will take on some established big-race performers on Saturday including multiple Group One winner Hartnell and New Zealand star and defending champion Bonneval.

They occupy the next two lines of early betting at $3.80 and $7 respectively.

Hartnell was narrowly beaten in the PB Lawrence Stakes (1400m) by Showtime first-up and trainer James Cummings believes the three-week gap since that race suits.

“He’s as bright as a button and capable of running well again,” Cummings said.

Mick Price has Mighty Boss and Hiyaam in the Dato and the trainer said Mighty Boss had come on a lot fitnes-wise since his unplaced run first-up in the Lawrence.

He expects an improved showing from Mighty Boss while he believes Hiyaam, who is on a Caulfield Cup path, can be strong late in the race.

Price is keen to stretch Mighty Boss beyond 1600m for the first time this campaign.

Hiyaam beat Unforgotten with a bold front-running display in the Group One Vinery Stud Stakes (2000m) during autumn before Unforgotten turned the tables again when they filled the quinella in the 2400m Oaks.