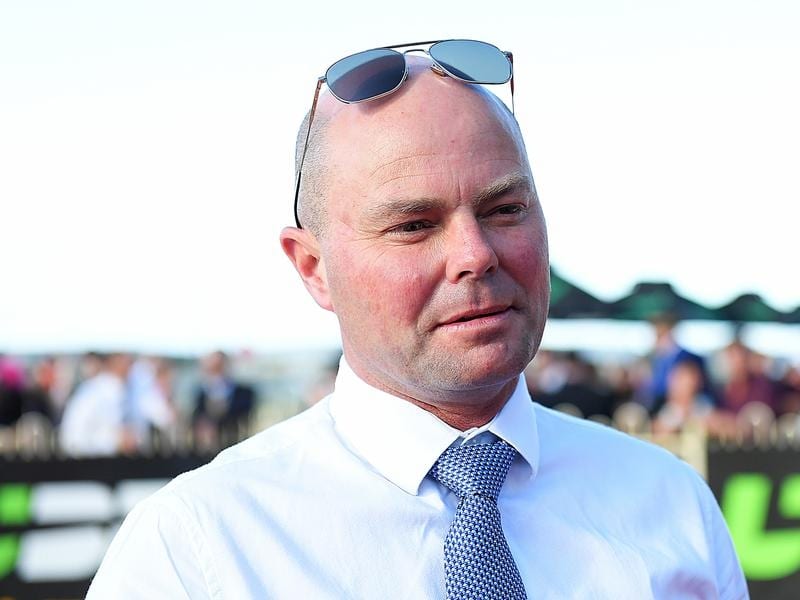 The prospect of a wet Caloundra track has swayed trainer Matt Dunn to run 2yo Karaja.

The prospect of a soft track has tempted trainer Matt Dunn to set two-year-old Karaja for what looks like an exciting clash at the Sunshine Coast.

Karaja will take on two other promising juveniles, Jewelina and Our Swan Lake, in Saturday’s Bruce McLachlan Classic (1000m).

The race threatens to steal the limelight from the Listed races on Caloundra’s feature day.

Dunn admitted he was in two minds whether to run Karaja in the McLachlan when he discovered the race had been dropped back from its previous 1200m to 1000m.

“But the prospect of a wet track was tempting because my horse might not have been well suited at 1000 metres on a dry track,” Dunn said.

“He won at his only start on a wet track and he will be strong at the finish.”

Karaja won his first start at Ballina and then made up ground when third at Ipswich two weeks ago.

Trainer Steve O’Dea has a big wrap on Jewelina who has won both her starts which include a victory over Karaja at Ipswich.

“She is out of the mare Bianca Jewel who was a stakes performer for me. She is certainly showing plenty of talent like her mum,” he said.

The Tony Gollan-trained Our Swan Lake had to overcome being caught deep early before winning her only start at Doomben three weeks ago.

“She won a trial in very good time before that and I have always thought she was at least Saturday class,” Gollan said.