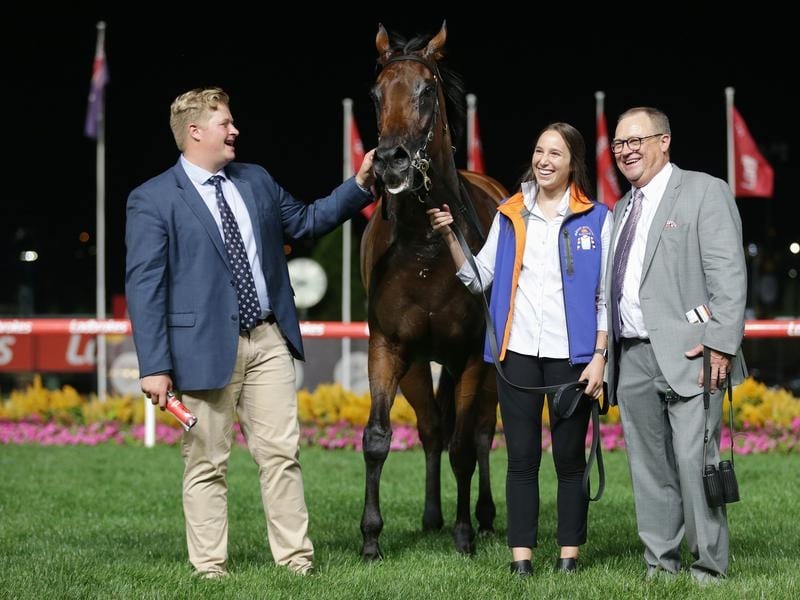 Trainer Tony McEvoy (r) is to form a partnership with his son Calvin (l) in thr near future.

Prominent trainer Tony McEvoy has surprised his son Calvin by publicly announcing the two are to form a partnership.

McEvoy told the audience at Saturday night’s South Australian awards function as he was honoured as the state’s premier trainer.

The paperwork is set to be completed this week with the hope the training partnership will be in place early this month.

“As a father, I’m excited and proud to have Calvin join me as a co-trainer,” McEvoy said.

“Even before he completed Year 12, Cal indicated he wanted to follow me into training and his work ethic deserves to be rewarded.

“Calvin has worked hard, his attention to detail is excellent and I’m delighted to have him join me in a training partnership.”

McEvoy believes the time is right to promote 24-year-old Calvin who, along with working for his stable full time in recent years has spent part of his education working for the Lindsay Park team at Euroa, English trainer David Simcock and Coolmore Stud in the NSW Hunter Valley.

“When Calvin came full time into the McEvoy Mitchell training operation in 2016, I set ground rules which he has complied with and he has never missed a day’s work or been late,” McEvoy said.

“His mother (Jo) often said I was too hard on him, but he never complained.

“I have tried to teach him the little one-per-centers which separates trainers.

“Let the animals tell you and he has picked that up and has given me smart advice with his decisions.

“He’s got an opinion, and he’s happy to back himself.

“It has led to the occasional heated family discussion, but I believe it is important for him to have confidence in his own observations.”

McEvoy has training bases at Angaston in South Australia and Flemington in Melbourne and is setting up a Ballarat stable where Calvin will eventually be based.

“Calvin has been running the Adelaide operation for a while now and will eventually be in charge of the Ballarat stable when it is up and running within a year,” McEvoy said.

The stable won 166 races during 2018/19, highlighted by six Group One victories.