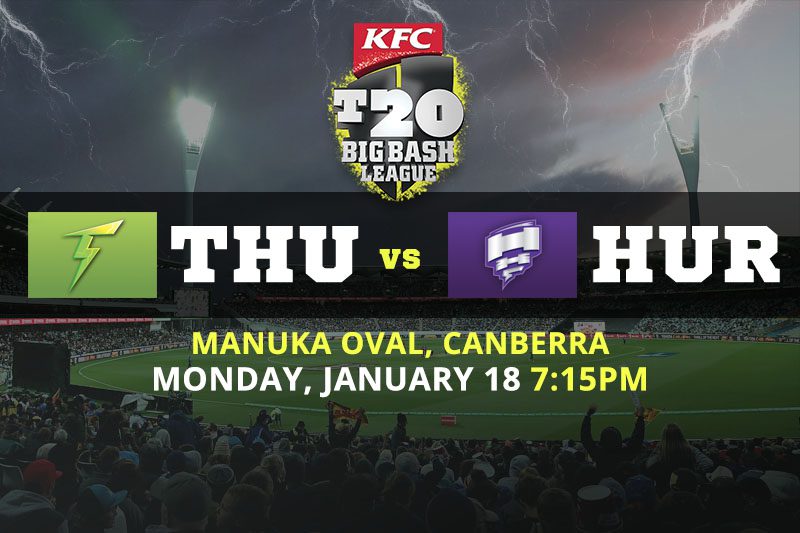 The BBL10 train continues when the second place Sydney Thunder host the seventh placed Hobart Hurricanes on Monday night at Manuka Oval. Despite the discrepancy in placings only four points separate the two sides and a win on Monday night for either side will be crucial in keeping their finals hopes alive for BBL10

The Thunder will be reeling after a poor display against their cross town rivals after scraping together 6/166. If it wasn’t for Alex Hales at the top of the order and then a late order flurry from Daniel Sams, the Thunder may have been restricted to an even smaller target. The Thunder were never really in the hunt for the points on Wednesday night and considering they have only been victorious twice in their last five occasions they’ll want to get their campaign back on track beginning on Monday night against the Hurricanes.

The boys in purple on the other hand were quite abysmal over in Perth when getting demolished by nine wickets in what can only be described as a disaster. The Hurricanes scratched their way to 5/139 off their 20 overs, and considering they only took a single wicket in reply Hobart certainly left Perth with their tail between their legs. If the Hurricanes wish to keep their finals hopes alive they need to bounce back quickly against the Thunder.

Despite losing three of their past five games, the Thunder are too good of a side to keep down from a challenge for too long, and with the BBL10 finals on the Horizon, the Sydney Thunder will be looking to get back on track against the Hurricanes. With a top order consisting of the likes of Usman Khawaja, Alex Hales and Callum Ferguson and a middle order of Sam Billings, Daniel Sams and Ben Cutting we’re backing the Thunder to put on quite the show on Monday night.

With a Twenty20 World Cup set to be held at the end of the year Alex Hales has certainly put his foot forward for a recall to the England national side. In ten innings the Englishman has hit 323 runs at a strike rate of over 150. He was one of the lone shining lights for the Thunder against the Sixers with a well compiled 54 and we’re backing him to bring up another half century in consecutive matches to help aid the Thunder’s chances.

To Hit A Six – Ben McDermott

Shane Warne came out during the week and said Ben McDermott should be the answer in regards to our new test number five. However, McDermott has been doing as he pleases in BBL10 with consistent performances coming as regularly as a new Warne opinion. He’s coming off a rare failure against the Scorchers, and we’re backing him to make a handy contribution against the Thunder which sees him lob one into the stands.