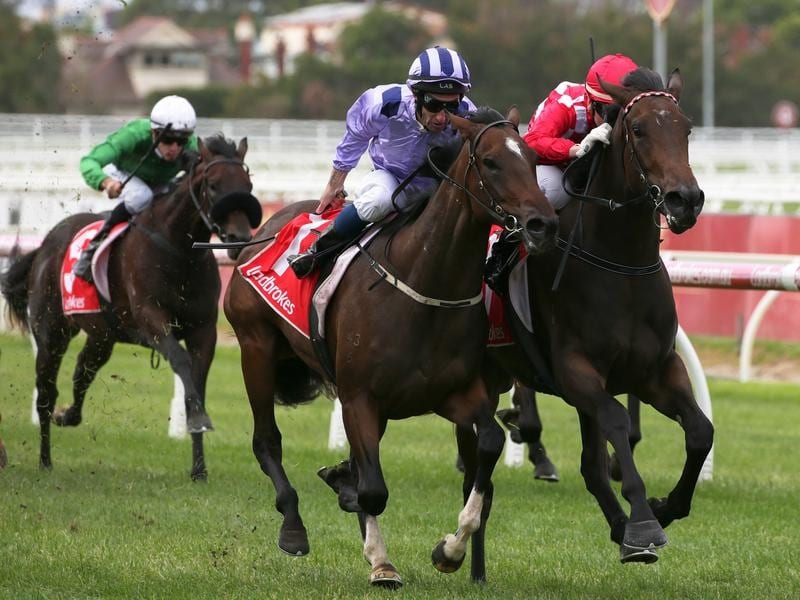 Thousant Guineas aspirant Meuse (l) has had a look a the Valley ahead of her return to racing.

Meuse will try to maintain a perfect start to her career when she resumes in a race at The Valley against a number of other Thousand Guineas hopefuls.

Saturday’s 1200m-race for three-year-old fillies has attracted 24 nominations, with the Anthony Freedman-trained Meuse to chase her third win from as many starts.

Meuse was taken to The Valley for a gallop on Tuesday morning in preparation for a campaign aimed at the Group One Thousand Guineas (1600m) in October.

“At the moment we’ve got the bar set at that standard,” Freedman’s son and assistant trainer, Sam Freedman, said.

“We can always lower it if she’s giving us the indication she’s not going to measure up to that.”

Freedman believes Meuse is showing the right signs she will stretch out to the Guineas distance, and possibly further.

Meuse won a maiden at Bendigo over 1100m on debut in March before heading to town where she won over the same distance at Caulfield the following month before having a break.

“She’s still got a lot of maturing to do. A good summer under her belt in a paddock will do her really good but hopefully she can get out to a mile this preparation and figure in some of those really nice fillies’ races.

“She has come back really well. She’s a lot more relaxed this time which is good. She was a bit flighty and a bit fizzy last prep.”

Freedman said Meuse could be a lazy worker at home but was pleased with her gallop at The Valley.

“It was Damian Lane’s first sit on her and he really liked her,” Freedman said.

“She came off the bridle and was really strong to the line and through the line.”

The Ciaron Maher and David Eustace-trained Kooweerup is another set to put an unbeaten record on the line in the race and was among those to gallop on Tuesday at The Valley.

Kooweerup won twice as a juvenile, including the Group Three Breeders Stakes in Adelaide, and worked with well-performed stablemate Loving Gaby.

Loving Gaby is also nominated for Saturday’s race but Maher said she would instead wait and have a jump-out next week.