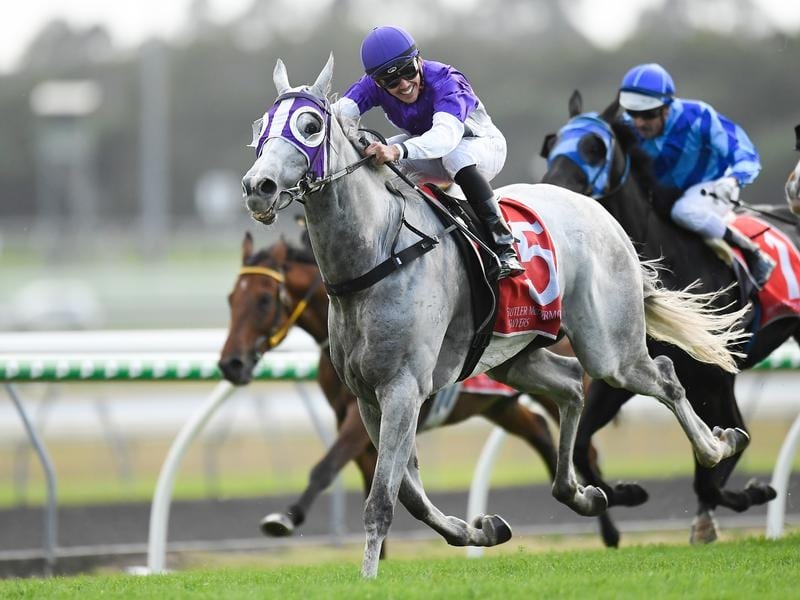 The Candy Man will be out for back-to-back stakes wins when he runs in the Brisbane Hcp at Doomben.

Trainer Barry Baldwin has a good reason for restricting popular grey The Candy Man’s build-up to the Brisbane Handicap to swimming in pools rather than the ocean.

The Candy Man returned to form in the Mooloolaba Cup two weeks ago and is aiming for back-to-back feature wins in the $125,000 Listed Brisbane Handicap (1600m) at Doomben on Saturday.

Baldwin has had The Candy Man swimming at the Eagle Farm pool where the gelding has shown a liking for water.

But Baldwin has kept him well away from the beach and the ocean.

“The reason is pretty simple. The Candy Man is not unlike in temperament to another very good grey horse I had called Baggio,” Baldwin said.

“Baggio was in the south one year and they took him to the beach. They caught him about two kilometres later after he took off swimming.

“That story has always stuck in my mind so no beach for The Candy Man.”

The Candy Man is back in Brisbane after a Sydney campaign in which he failed to run a place.

“Nothing went right in Sydney. I am convinced his run in the (Group One) Epsom was among the best three in the race,” Baldwin said.

“He proved us right with his win in the Mooloolaba Cup.”

The Candy Man will back up in a Quality at Eagle Farm on Saturday week and then try to qualify for the Magic Millions Trophy via a wild card race on December 28.

“He isn’t paid up for the Magic Millions so he needs to get the wild card. But it would have been three weeks into that race so he will need to back up next week,” Baldwin said.

Baldwin said The Candy Man was a horse who thrived on long campaigns.

“If you look at his record it takes him six races to get to his top. It is why we are never in a rush to turn him out,” Baldwin said.

“He is unbeaten at Doomben and just needs a bit of luck to be right in the finish again.”

Cahill hopes to return from injury later this month.