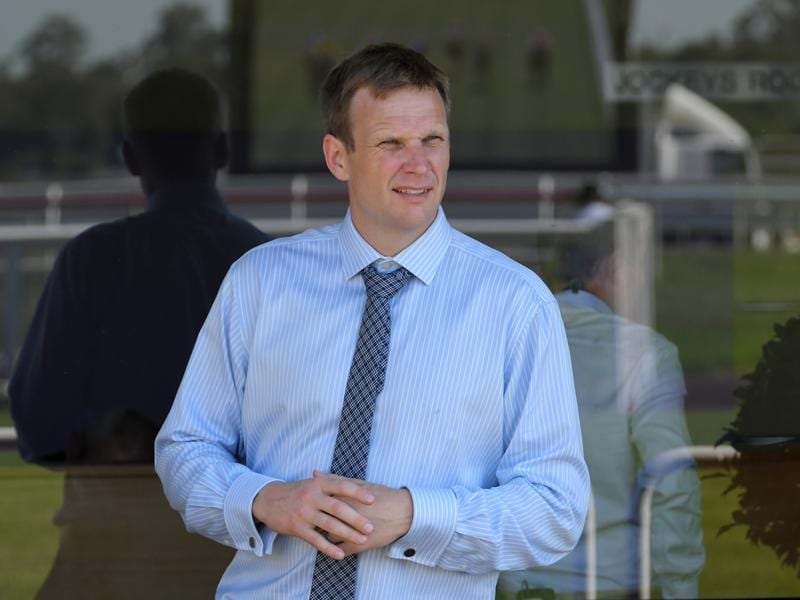 Bjorn Baker is adopting the adage, ‘if it ain’t broke, don’t fix it’ as Hinchbeast bids to replicate his debut win and shore up a Magic Millions Classic berth.

The two-year-old will contest Saturday’s Drinkwise Plate (1100m) at Rosehill over the same track and distance he scored at last month.

The colt mustered speed from an inside draw, strung the field out and held on for a game win over Volterra with the pair streeting the rest of the field.

Baker has seen no reason to change anything ahead of Saturday’s assignment with the youngster even coming up with the same barrier.

“The blinkers remain on and Hugh Bowman remains on from gate one again,” Baker said.

“He is a big, tough son of Hinchinbrook and he’s got a good attitude.

“He has come through the run really well and the two-and-a-half weeks (between runs) suits.

“I will leave it up to Hugh but I don’t think we will be changing too much.”

Of the eight two-year-olds lining up, five are vying for Magic Millions qualification – Hinchbeast, Farnan, Tycoonist, Kerrisdale and Sancy.

With just over $33,000 banked and Saturday’s race worth $58,000 to the winner, a victory will all but guarantee Hinchbeast a spot in the $2 million January showpiece.

“That one win is crucial and if he happens to win Saturday he is pretty much in the race,” Baker said.

Hinchbeast will be one of nine Rosehill runners for Baker along with last-start winner Soldier Of Love and recent recruit Bobby Dee in the Bisley Workwear Handicap (1500m).

Formerly co-trained by his father Murray in New Zealand, Bobby Dee has been transferred to Baker’s Warwick Farm base to chase the richer Sydney prize money.

There are no grand plans for the horse but Baker hopes he can pay his way.

“He is well performed over there and he’s done a good job,” Baker said.

“He is drawn a bit awkwardly but I think he has improved and he definitely looks better in the coat from his first-up run.”

Baker is also expecting a good performance from Spencer in the Rosehill Bowling Club Handicap (1400m) and is banking on the addition of blinkers to help Echo Jet turn around his form in the Schweppes Handicap (1200m).