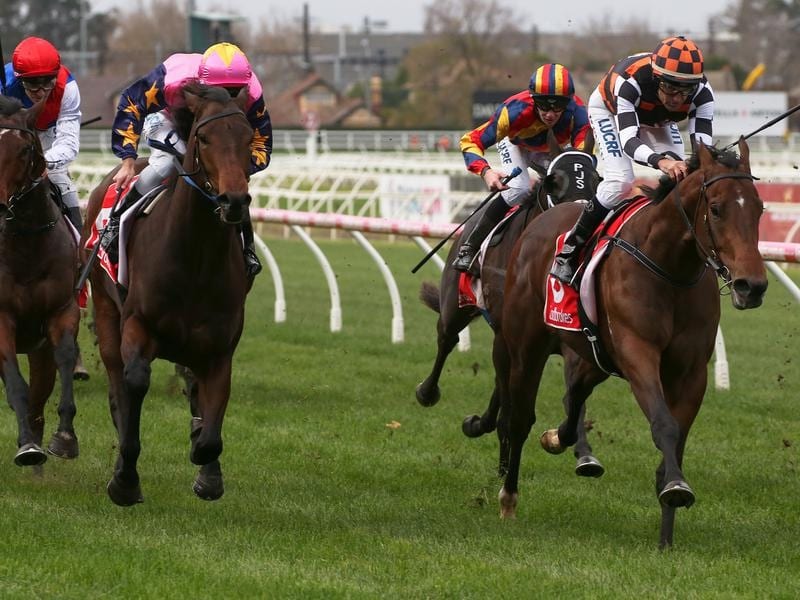 The Tony McEvoy stable has spring plans for The Astrologist (right) after a tenacious Caulfield win.

The Tony McEvoy stable expects The Astrologist to be a major player in the spring following a hard-fought victory at Caulfield.

After settling in front, The Astrologist was headed by the runner-up Can’t Be Done in the straight before fighting back to win Saturday’s Whisky Wine & Fire Handicap.

Calvin McEvoy, assistant to his father Tony, said The Astrologist had developed since a gelding operation and a spell following a summer campaign.

The Astrologist was sent to Queensland as a potential Magic Millions contender, but was injured in a lead-up race at the Sunshine Coast.

“We thought he’d go there and have a soft kill,” McEvoy said.

“But it didn’t turn out that was as he hurt himself but he’s come back, grown and matured a bit more.

“He’s a beautiful big scopey horse and we’ve been working him towards what he’s going to be, a miler.”

McEvoy said there were no plans ahead for The Astrologist which may include backing off now and looking at some of the bigger spring races.

“There’s a lot of options, especially some nice races here at Caulfield in the spring,” McEvoy said.