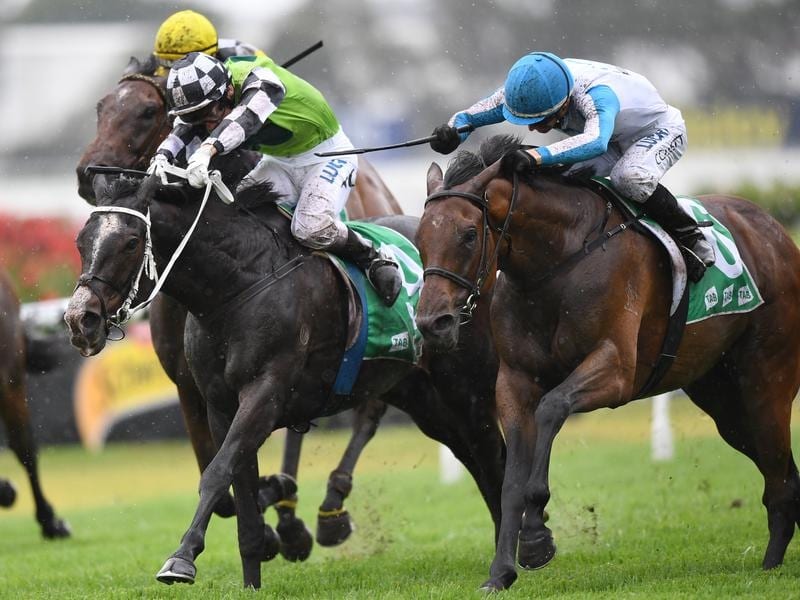 Testashadow (right) has been taken from Sydney to Brisbane for a suitabl race at Eagle Farm.

It is the second time in recent months Portelli has sent Testashadow north in search of a suitable race.

Portelli had booked apprentice Nick Keal for Testashadow but when the young rider was ill and no suitable replacement was available, senior rider Robbie Fradd took the ride.

In the end Testashadow was beaten a length by Kubis and many felt he would have gone close to winning with Keal’s three kilogram claim.

This time Portelli is taking no chances and has booked premiership leader Jim Byrne for Testashadow.

Portelli feels as the winner of $1.4 million prize money Testashadow is nicely placed with 57.5kg.

“Jim has ridden Testashadow before and his style suits him,” Portelli said.

Testashadow has had one run since his Eagle Farm third finishing 13th in the Group Three Cameron Handicap at Newcastle two weeks ago.

“It wasn’t a bad run because he was three deep the whole way and I think he knows when he is beaten these days,” Portelli said.

“But it is hard to find a race for him. He still has a high rating and in Sydney he meets younger horses coming through and he has to concede weight.

“Some of these races in Brisbane suit him far better at this stage of his career.

“It is just a matter of finding the right race for him.”

Testashadow has been a regular interstate traveller over the years with some of his best wins in Queensland.

His stablemate Strome has drawn wide in the Benchmark 80 race and Portelli is debating whether to start her.

Portelli has had plenty of success in Brisbane lately with horses such as Special Bullet and Picaro.

“Obviously it is pretty tough in Sydney at carnival time and Brisbane is a good alternative,” he said.