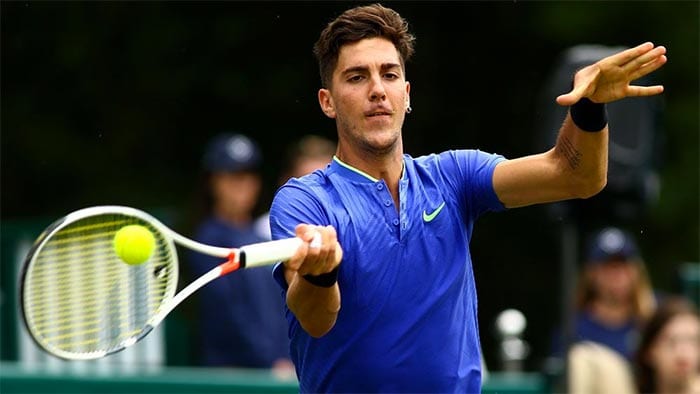 Thanasi Kokkinakis is one of Australian sport’s hottest prospects – or he would be if he could stay on the court.

The young Melburnian has endured some cruel injury setbacks in his first few years on the ATP Tour and always seems to go down just when things are starting to go right.

Can he get his body sorted and have a proper run at this year’s Australian Open?

Check out the latest Kokkinakis tennis odds and read up on career stats, grand slam records and everything else you need to know about this Aussie young gun.

There is a lot of excitement around Thanasi Kokkinakis, and rightly so.

His performances in the middle of 2017 led some observers to dub him an even better prospect than his compatriot and close friend Nick Kyrgios.

But we must remember that this kid has done nothing yet.

Those years out with injury have hampered his progress and only now is he beginning to understand what playing on the ATP Tour is all about.

The talent is there, as is an almost overzealous work ethic, but don’t expect any Australian Open fairytales from Kokkinakis just yet.

The Adelaide youngster had just bolted into the top 100 in the ATP world rankings when, at the end of 2015, he was forced to undergo surgery on his troublesome left shoulder. He missed the Australian Open, the French Open and the Wimbledon Championships as a result. He returned for the Rio Olympics, where he was ousted in the first round, only to pull out of the US Open with a torn pectoral muscle.

In a rare moment of physical fitness, Kokkinakis partnered with Jordan Thompson to win the 2017 Brisbane International men’s doubles. In doing so, they became the first Australians ever to claim a senior title at the event. Injuries continued to haunt Kokkinakis, however, forcing him to skip the Australian Open for the second year in a row. It wasn’t until May at the Lyon Open that he returned to competitive singles play after some 19 months off the circuit.

This is where the revival begins. A first-round exit at Roland Garros was followed by a wildcard entry into Queen’s, where Kokkinakis claimed a stunning straight-sets win over Wimbledon finalist Milos Raonic. He rode that form to the All England Club only to run into Juan Martin del Porto, who edged him out in a tense four-set tussle. The young Australian then went on a career-best dash at the Los Cabos Open in Mexico, upsetting Tomas Berdych to reach his first-ever ATP final.

Before his injury woes, Kokkinakis was considered a cocky so-and-so who was headed down the same incident-strewn path as Bernard Tomic and Nick Kyrgios. Since his return to the circuit, however, he has earned widespread plaudits for his attitude, professionalism and work ethic. Those invaluable traits, combined with bags of ability, should see him in good stead over the coming years.