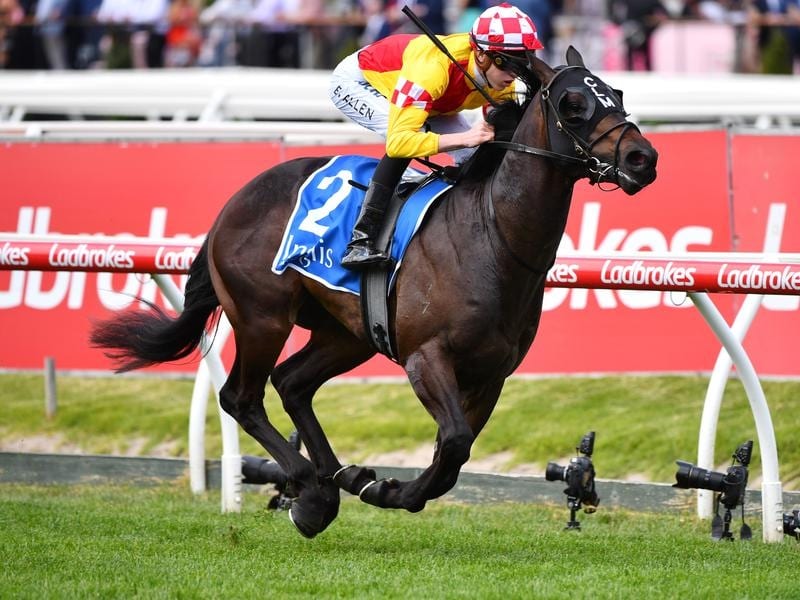 Tanker has made a bright start to his career with victory in the Dubutant Stakes at Caulfield.

Ciaron Maher wasn’t sure what he was going see from Tanker when pressure was applied to the colt in his race debut at Caulfield.

Although a little wayward, Tanker ran out a comfortable winner of the Listed Debutant Stakes (1000m) on Saturday and Maher, who trains in partnership with David Eustace, was immediately talking about the colt as a Blue Diamond and Golden Slipper contender.

Maher knew Tanker had ability and after a trial at Cranbourne on Monday applied blinkers in a bid to curb the colt’s waywardness.

“We knew he was a bit raw but had a bit under the hood,” Maher said.

“When Ben half pushed the button the other day he didn’t know whether to go left, right or whatever, but there was a bit there.

“He came on from that as the young ones do and was quite impressive.

“He still had a good look around and I’ll say he’ll have a good sleep tonight, but he’ll improve so much for today”.

Tanker is from the first crop of Pride Of Dubai, the 2015 Blue Diamond Stakes winner.

Maher said he had a few of the Pride Of Dubai stock in his stable describing them as impressive types.

“He was a ripping type himself and he’s put a bit of that substance into them.”