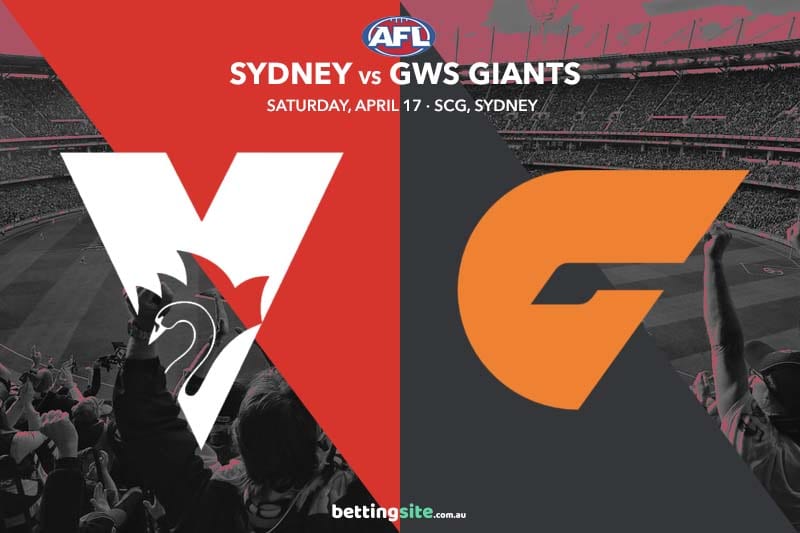 The 20th Battle Of The Bridge takes place at the SCG on Saturday afternoon, when the undefeated Sydney Swans hosts their crosstown rival GWS Giants in what is shaping as one of the games of the round in AFL action.

The Swans managed to scrape home against Essendon on Thursday night footy, despite trailing the Bombers by 25 points early in the first half. During the win, the Swans picked up injuries to key players Isaac Heeney (hand) and Dane Rampe (finger) and will be without the key duo for at least a month. For the Sydney Derby, the Swans are expected to call upon James Rowbottom who has recovered from a knee injury, sustained in Round 1.

The Giants on the other hand finally picked up their first win of the season against the Pies on Saturday and came through the game with a clean bill of health. Harry Perryman and Lachie Whitfield are still a couple of weeks away from returning to the team, so the Giants will have to do this without those two. Giants coach Leon Cameron could opt to keep the same 22 that got the job done against the pies, despite Sam Reid being available after his suspension and Jesse Hogan getting closer to full fitness.

The Swans are the $1.45 bookies elect to defeat the Giants, who are undergoing somewhat of a mini-rebuild after losing Jeremy Cameron and Zac Williams during the off-season. The Giants are offering plenty of value with AFL betting sites, paying close to $3 the win.

How will the Swans v Giants play out?

When the Sydney Swans dismantled the Giants in Perth last year to the tune of 41 points, it was led by Luke Parker who had one of his best games of the season with 29 touches to his name. Parker has not usually fared well against the Giants, averaging just 22 touches against them in his career. On the back of a rapid start to his 2021 season, the value looks to come from him picking up 30+ touches against the Giants with odds of $2.80 available for him to do so.

Giants fans left the MCG on Saturday night pondering why Jeremy Finlayson had only just played his first game of the year. The returning key forward booted four goals in his sides win over the Pies and will be looking to build on his good form with another solid showing against the Swans. With $3.10 available for Finlayson to kick 3+ goals on Saturday afternoon, it is value too hard to ignore considering the Swans will be without their best defender in Dane Rampe.

George Hewett is far from a household name outside of the four walls at the Sydney Swans, whereas Toby Greene is an out and out star of the competition. Greene has had the best start to a season of his career and has 13 goals to his name from the first month, including two bags of five goals in consecutive weeks against the Dees and then the Pies.

Greene is also the GWS stand-in captain because Stephen Coniglio is out with injury, and will be a key factor if the Giants are to upset the Swans. With Rampe out, the job looks set to be handed to Hewett who faces the tough ask of curtailing Greene’s influence on the game. Hewett restricted the great Dustin Martin to just 20 disposals a fortnight ago, and expect a similar lockdown role on the ever dangerous GWS small forward.

There is no question the Swans are the more consistent of the two Sydney sides. However they showed glimpses of weakness against an injury ravaged Essendon line-up, suggesting the Giants could be getting them at the right time. No Rampe and Heeney is massive and with the Giants brimming with confidence they could be hard to stop.

During the final quarter of the Swans win against Essendon, it looked like Tom Papley was going to rip the game away from the Bombers. Papley finished with 1.2 but the signs were there suggesting he was back to his best. Having booted four goals against Richmond at the MCG, Papley will no doubt want to continue his good form on Saturday night. In ten games against the Giants he only has 14 goals against them, but this year he does need to worry about Heath Shaw curtailing his influence.

We feel like the discrepancy in the market has the Giants the smarter play in this one. It should be a close contest all afternoon, and if the Giants kids can stand up against the highly-rated Swans’ kids it could be a high quality affair. Expect old heads Luke Parker and Tom Papley to pick up the slack that Heeney and Rampe leave behind with their omissions. The Swans are due a downer and the Giants played a better brand of football against Collingwood last start. We’re willing to take a chance on a Giants win here.