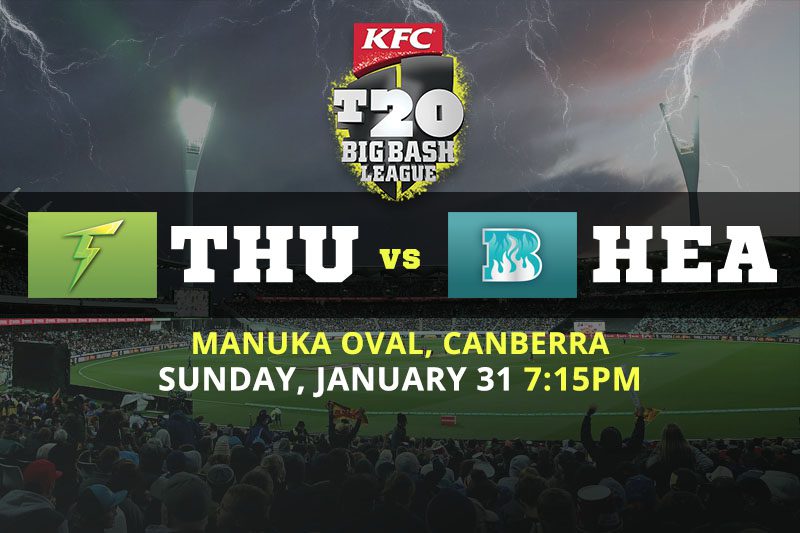 Manuka Oval plays host to ‘The Knockout’ where the third placed Sydney Thunder comes up against the winner of ‘The Eliminator’ in the Brisbane Heat. The Thunder have opened BBL betting favourites in the online markets with odds of $1.70. The Brisbane Heat are $2.15 outsiders, but are the team in form heading into this matchup.

If the finals were played early on in January the Thunder would be running away with this match without argument. However, they have only won two of their last five matches, and they lost their last match against the Brisbane Heat by 5 wickets back on January 4. For the Thunder to win they will need a big score from one of Alex Hales, Usman Khawaja, Sam Billings or Callum Ferguson. Outside of the Top 4 they have genuine stroke players, which may not be ideal if they lose a couple of early wickets, as the Brisbane Heat tend to strike early on recently. There is no doubt the Thunder have a great lineup, but can they overcome their poor form to topple the Heat?

The Brisbane Heat have been playing “knockout cricket” for their last three matches and have gotten the job done in all three of those matches. In knockout games such as this it is hard to ignore the form team and with wins over the Renegades, Scorchers and Strikers in the past week they look hard to beat. Since the inclusion of Marnus Labuschagne back from test duties he has added a sense of calm and with the likes of Chris Lynn and James Pierson in fine form they seem to match up perfectly against the Thunder.

When the two teams last met on January 4 the Heat put in an all round performance against the Thunder to win by five wickets. Needing to chase 175 for victory the chase never really looked in doubt with thanks to twin 50’s from Joe Denly and Joe Burns to go with their 90 run partnership. If recent matches are anything to go by, ‘The Knockout’ could follow a similar pattern, especially as the Heat like to chase whatever the opposition sets. No doubt the Thunder are the overall superior team throughout BBL10, but if you are not in form at this time of year it is an uphill battle.

He is one of the best batsman in the world and Marnus Labuschagne has proven his worth to the Brisbane Heat in every game since joining the squad since his test duties finished. With scores of 28, 49, 46 and 6 he has been crucial to the Brisbane Heat’s resurgence and will look to drag the Heat into ‘The Challenger’ with another handy contribution. Also, if you are a bit of a daredevil, odds of $3.30 are available for Marnus to take 2+ wickets, and that looks good value considering he has taken six wickets combined in his last two matches.

It has been a summer to forget for Joe Burns, but he has shown glimpses throughout BBL10 that his best is still quite impressive. He came in at a tricky situation for the Heat in ‘The Eliminator’ but his composed 17* was exactly what the doctor ordered. He got back into form when the two teams last met with his first 50 in some time, and will be needing to make a contribution tonight if the Heat are to progress. Coming in at 5 or 6 he may only get two or three overs to make that contribution, but the former “Bash Brother” will be looking to end his summer on a high.